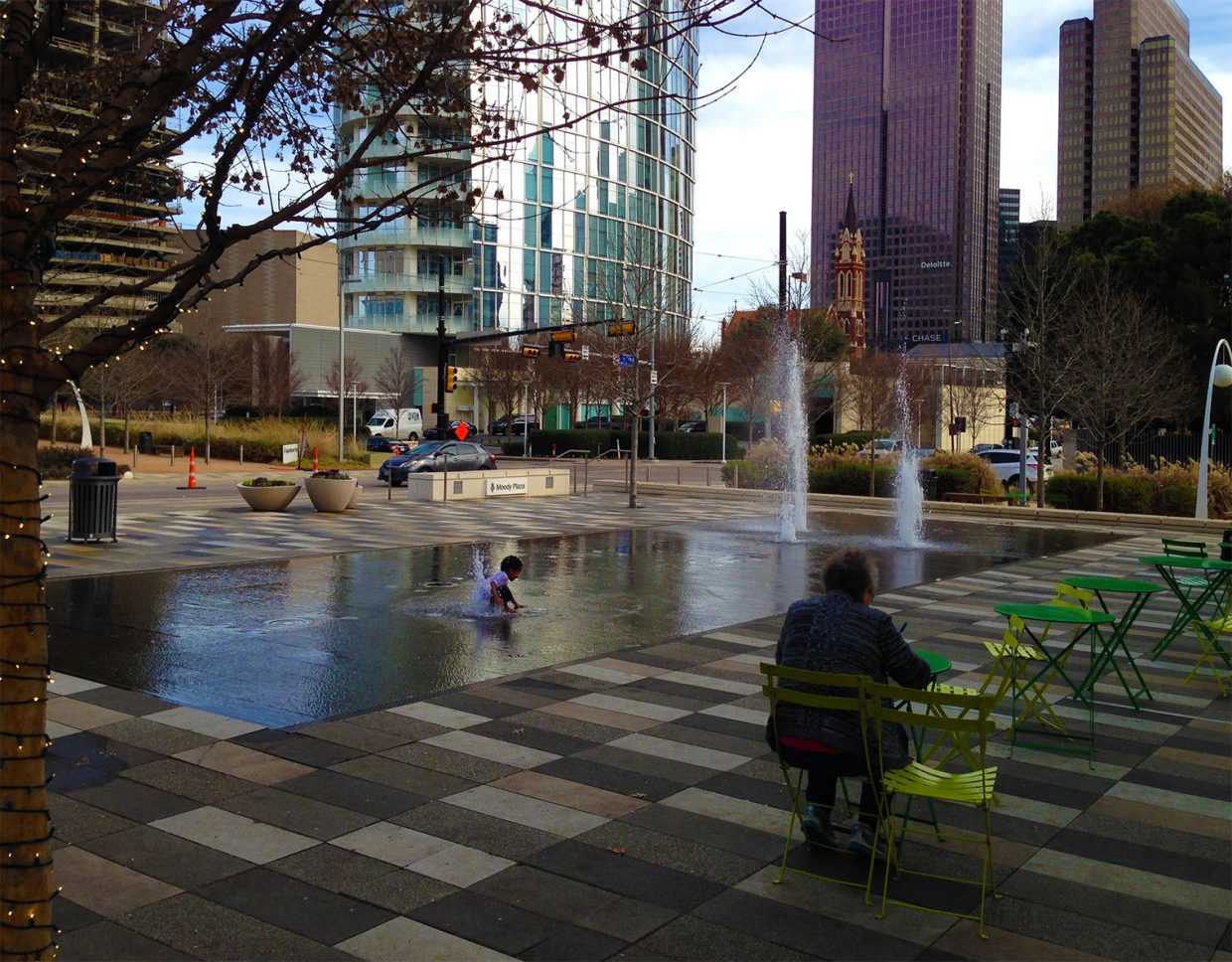 Working: In the sky, Dallas

Laundry: In the sky, Texas

This Week in Laundry I explore anchors, decisions, bias, and alignments down in Dallas Texas.

It’s been cold in Dallas. Cold for Dallas. Below freezing. When the water fountains and features that accompany every other prominent element of downtown architecture start to freeze over.

Yet still the water runs. Were this Chicago or Wisconsin those features would be drained. The pumps retired. Pipes filled with air. In preparation for the freeze. 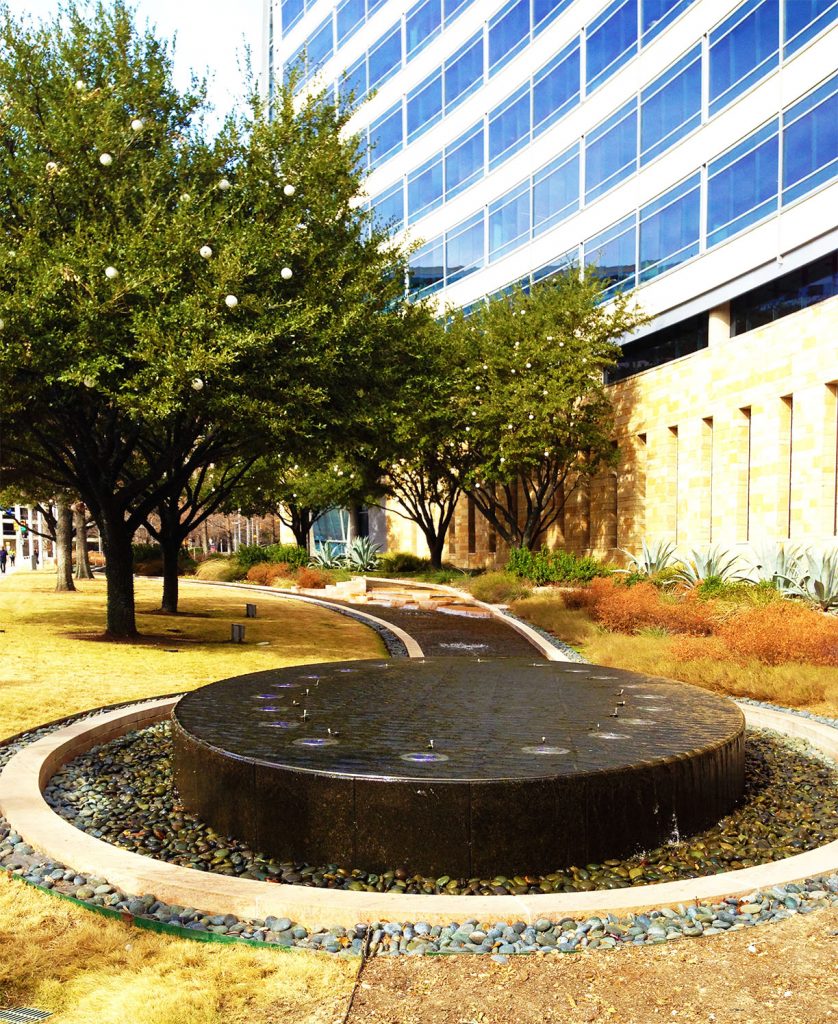 A meandering water feature outside the Hunt building in downtown Dallas

Instead, in Dallas, the water still runnith. It freezes over as it flows. Like an Alaskan stream in the fall. 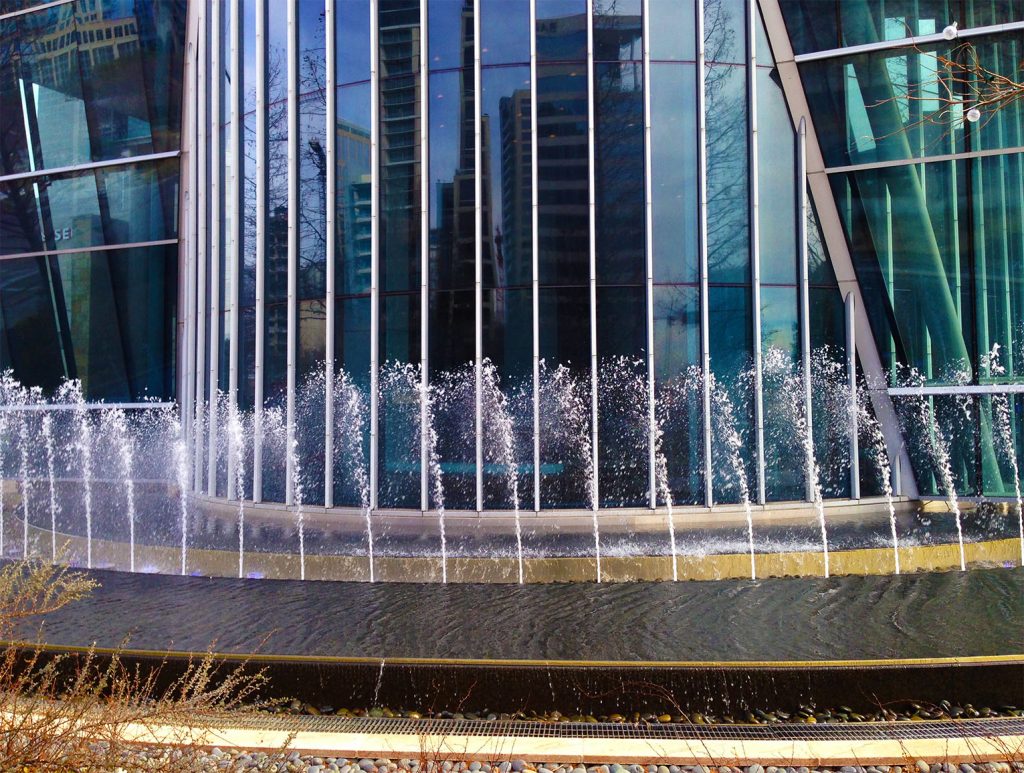 The fountain at the Hunt building, sometime after the freeze subsides

When the weather next week peaks at 75, I suppose winterization of one’s water features and fountains doesn’t make sense. The freeze is only temporary. And as long as nothing damages, no harm done. It depends on the risk you’re willing to take on.

The city gets quiet when it gets cold. No one goes outside. Except for me – because 28 degrees is balmy compared to the zero Wisconsin sees.

Until it snows. Because water and ice make their way to the sidewalks and the roads. And here in Texas, sand and salt are a foregone investment. Under snow conditions I don’t avoid the outside adventure because of the temperature. But because of the danger. The problem of walking on icy concrete. Without the sand and salt used to thaw the northern counterparts.

It puts a damper on those midday walks to uptown I so enjoy. The route from main street flows through and by many Dallas staples. The art museum. Klyde Warren Park, perched above the dug-in interstate. The Perot Museum of Nature and Science – a modern megalith. And the Hunt Building, with its extensive water feature system. And the Fashion Industry Gallery, with its water feature system. And the megalith of church complexes, the Dallas First Baptist Church. 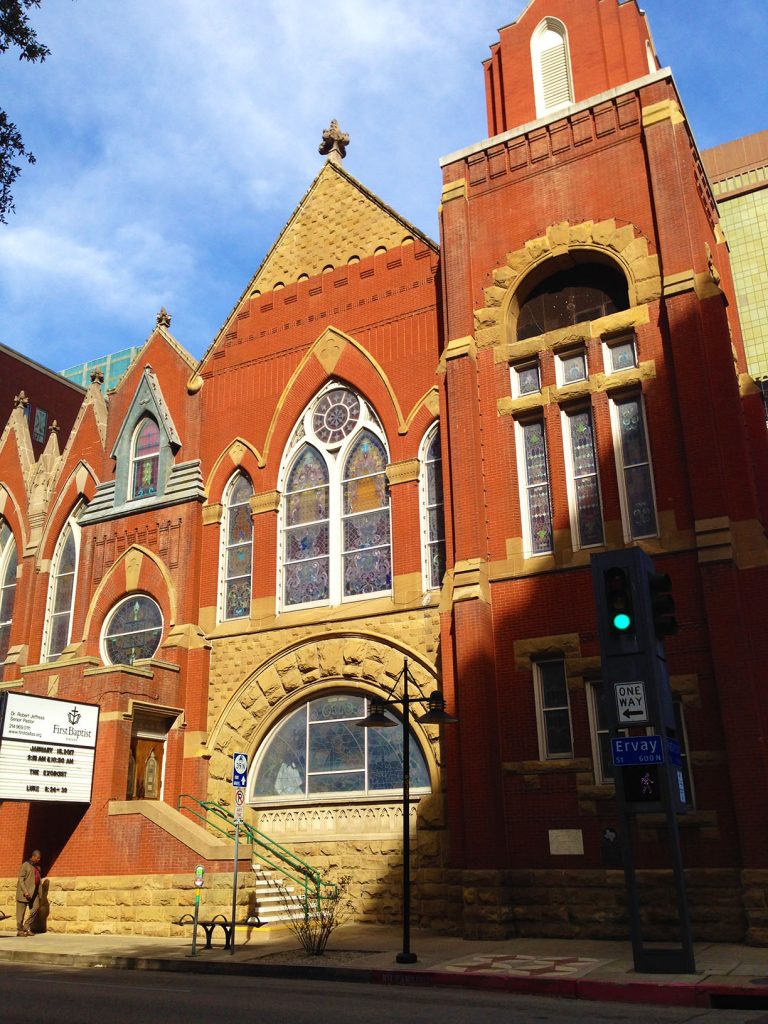 The traditional Facade of the First Baptist Church in downtown Dallas 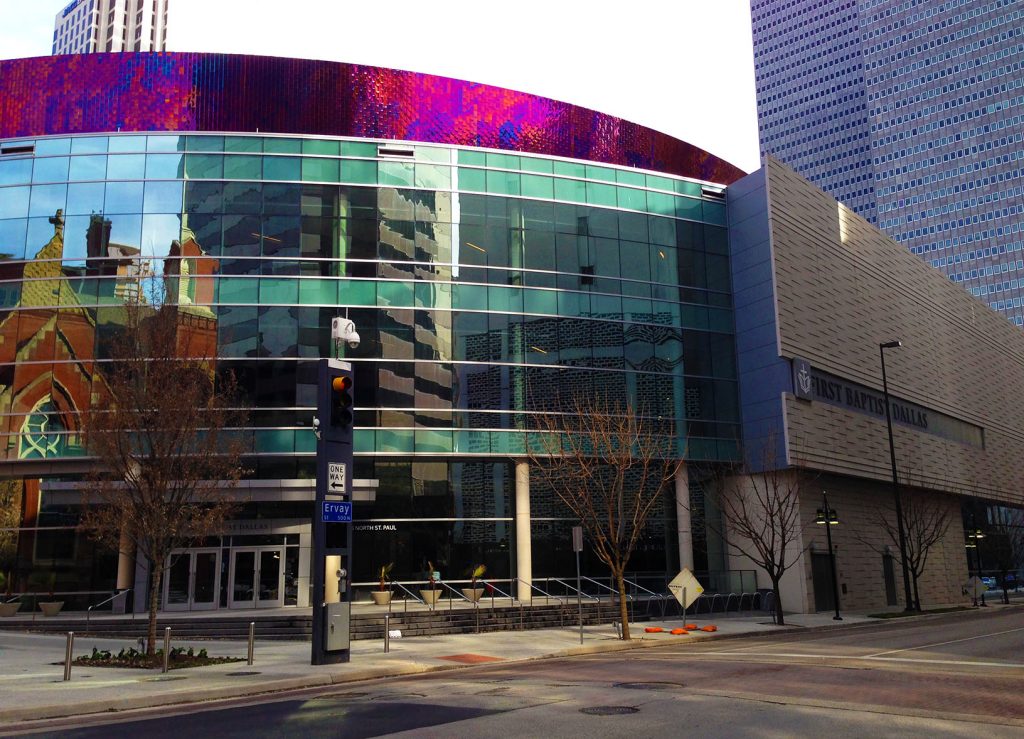 One of many modern extensions to the megalith First Baptist Church

So in the midst of my ice imposed isolation, I find a quiet moment for laundry reflection. And many moments for self-education. As I continue to dig into Dan Ariely’s Predictably Irrational. I’ve only made it to chapter three. And yet, already, there’s so much to consider.

Somewhere around chapter two or three Dan presents the concept of anchoring. He describes the process much akin to the way goose hatchlings imprint on the first moving thing they see. So too do humans imprint, or anchor, upon the new. We reference our future experiences and concepts against these anchors.

Dan talks about the anchor in the context of value evaluation. Meaning how much a thing should cost. Or figuring out how much we are willing to spend on any given thing or experience. He is, after all, a behavioral economist. 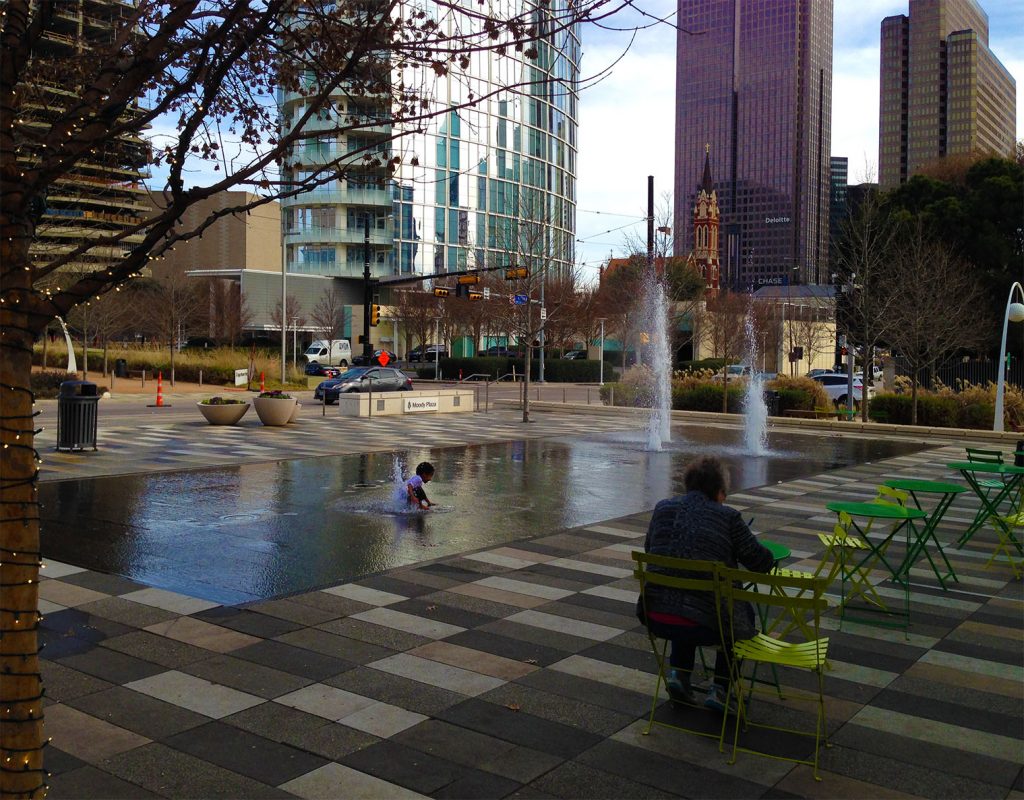 This kid seems anchored to this water fountain. He sits atop a spigot in Klyde Warren Park

But I wonder if imprinting, anchoring, and biases bound to first impressions and first actions aren’t a little more general that the bias we create in cost evaluation.

Are there biases bound by first impressions that exist beyond economic metrics? Do we create anchors from first actions that influence our behavior, even our identity, in ways that extend far deeper and further than the exchange of money for goods and services? And could such action anchors be so fundamental to our identity and behavior that they slowly and subtly sit as the basis for our cultural alignment?

To answer these questions requires an exploration of an ancillary concept of bias. Decision bias.

Or at least that’s what I will call it. Because I don’t remember what it’s actually called.

I first learned about decision bias in undergrad. I took a course as a part of my media (film) studies major entitled The Theory and Practice of Persuasion. Though a component of communication arts curriculum, this course practices applied psychology. For many reasons, this was likely the most important class I took in my undergrad coursework.

Decision bias is simple. It works like this: once we make a decision, our preferences bias to the decision made.

Say you’re trying to make a decision. A big decision. Like buying a house. Or a car. And you’re on the fence between two options. A clean 50%/50% preference for either.

And the fear of missing out, FOMO, lingers in the air as you deliberate over your decision. What if you waste your resources on one option, when the other would have brought to you better worth? More happiness? You fear the missed opportunity of the other option, should you pick any option.

For that reason, I like to think of FOMO as the fear of missed opportunity.

But you must make a decision. You need a home in a new metro area. Or a new car, when the old one broke down. So you make one. You commit. You commit in your mind. Then on paper. Then in money. And then in property.

After making a hard decision, if you were to make the decision again, it would be much easier. Because after the commitment, your preferences change to align with your commitment.

Maybe that’s because we need to justify the decision in a simple way. So we consider that we must have preferred the decision we made, or else we wouldn’t have made it in the first place! Or perhaps it is because the abandoned option is no longer on the table. So we no longer consider it.

Or maybe it’s just another form of anchoring. The initial decision becomes the anchor. A first impression based on that initial action. As people, we’re more comfortable with what we know. Our prior decision influences future decisions. We judge future behaviors, actions, and decisions as acceptable based on this bias born from the anchor. That we considered the behavior acceptable before. So we consider it acceptable once more.

Dan touches upon this point in his book. How anchors form the basis for our behavior. He specifically leverages the Starbucks experience for his example.

It seems to me that decision bias and anchoring express themselves as two sides to the same coin. In the least they seem to share a common root. As if the pleasure of new places opens the opportunity for new bias anchors.

Dan makes it obvious that decision bias influences economic behaviors. But does it influence social and culture as well? Even identity? 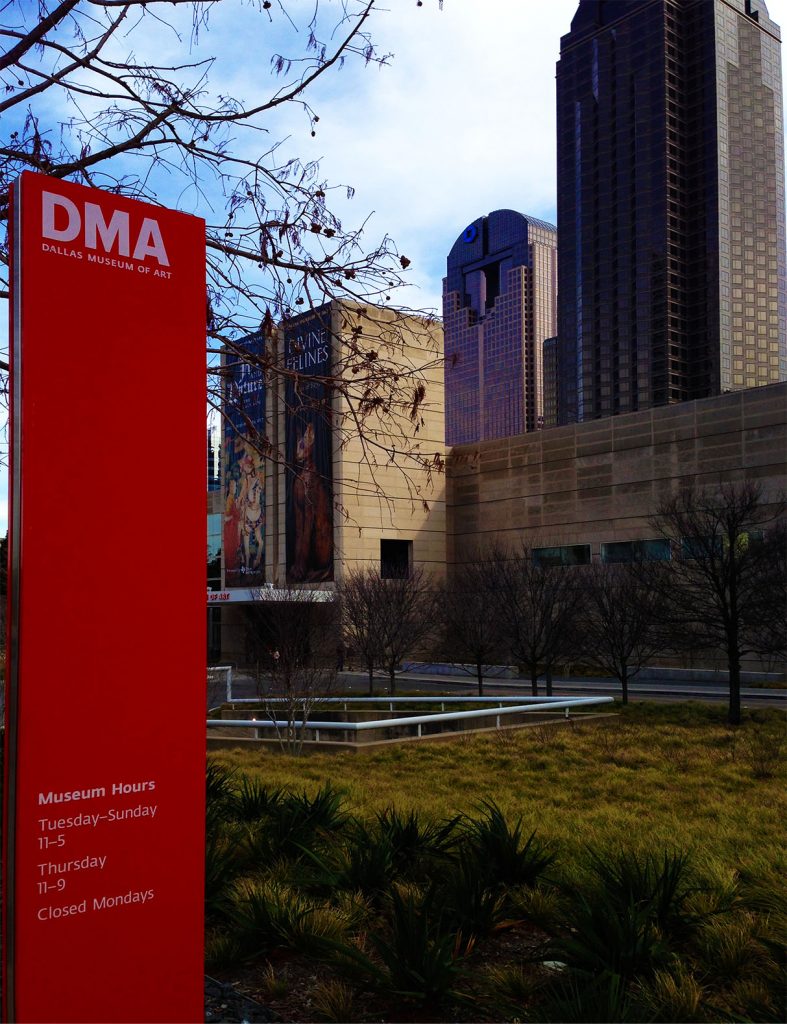 Sometimes that culture manifests as paintings and sculpture. Which in turn manifests as art museums. The Dallas Museum of Art, downtown Dallas

Each of these manifestations within ourselves or through each other grows. Decision by decision. Action by action. Through that understanding, we have first actions. Which means we form anchor biases. These biases likely help root ourselves within our local culture. Headed in one direction or the other. For any aspect of culture or identity that varies by region and by person.

Decision bias forms a natural cornerstone of human behavior. It’s an unavoidable fact of you being you. It exists as a two-edged sword. On the one hand, it could be detrimental. Because it shades any and every decision we make as the right decision, and may prevent us from seeing or acknowledging our mistakes. This hurts us from correcting our past mistakes and improving future decisions through our learned failures. As such it shows similar properties to the issues surrounding sunk cost bias.

On the other edge of that sword, decision bias shines as an important tool to combat the fear of missed opportunities. For in any hard decision where FOMO lingers, we may rest assured that no matter what decision we choose, bias will appear afterwards to weigh our choice as our preference. Shaping our desire towards the opportunity we chose. Diminishing our desire for the opportunity we missed through the making of our decision.

Armed with this understanding, we can rest assured when making hard decisions in the face of FOMO, that no matter what decision we make, it will feel like the right one once we commit. In such difficult decisions, the important thing is making any decision at all. And then moving on. Decision bias will help take care of the rest. Anchoring us within our commitment.

As it should be with decisions, so too is it with laundry. And blogs written while doing laundry. The moment to move on. In doing so, I decide to make peace. I will not write all that I wanted to write about. And I commit to publish what I’ve written this far. Now that the decision is made, to walk away from all that I did not say, it seems clear. It was the right one. Such is the bias that forms after the commitment.

That and I need to pack away my clothes.