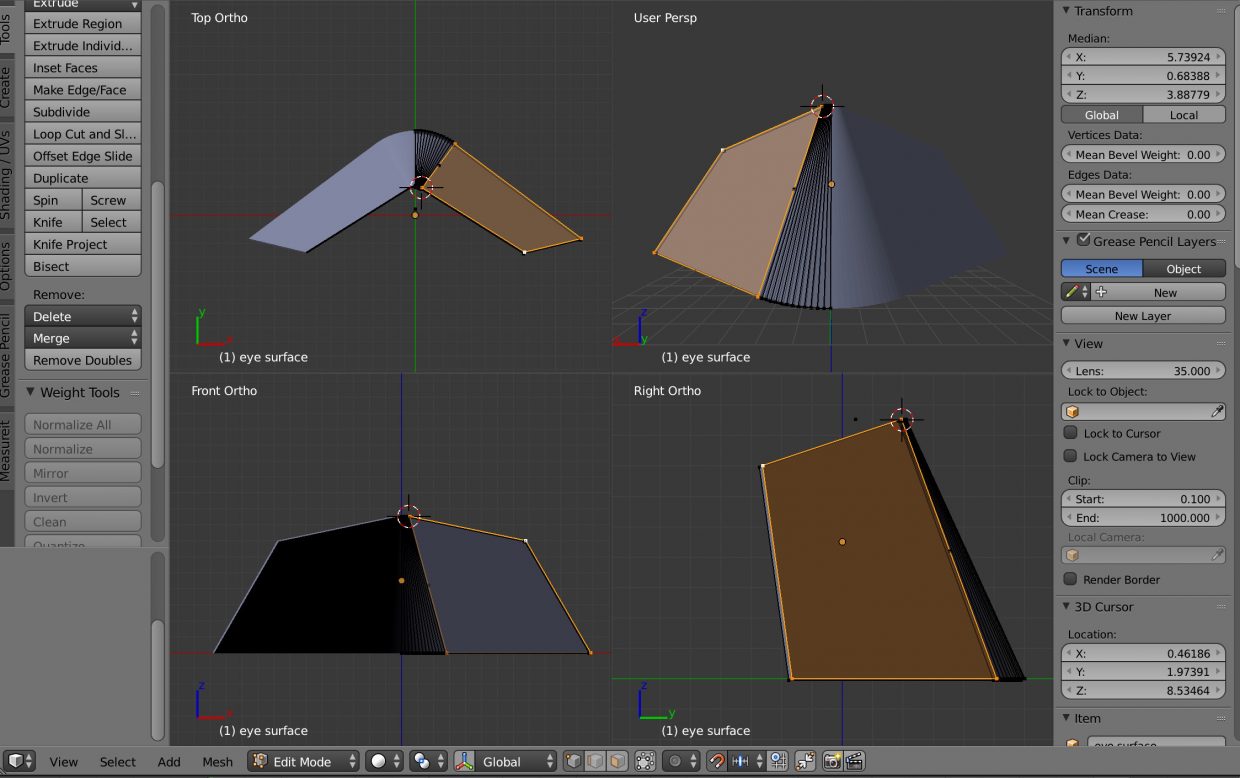 This Week in Laundry I make a thing.

I spent the week designing.

This morning I went on down to the Dallas Makerspace. Fired up the laser cutter. And cut some parts. 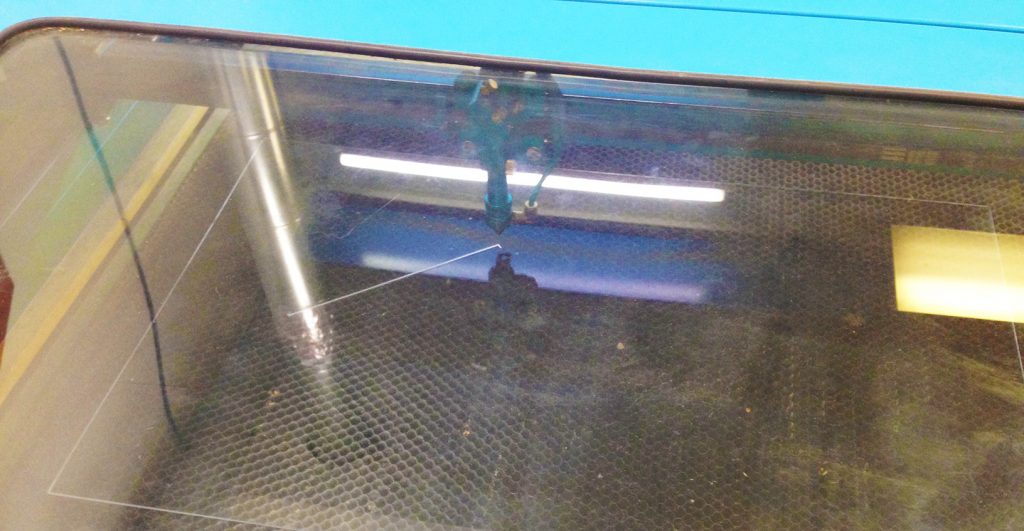 Cutting acrylic on the laser cutter at the Dallas Makerspace

I taped the acrylic pieces to foamboard. And cut the board to template with a blade.

The whole process was not without mistakes. My first laser cuts didn’t go all the way through the acrylic. Even though I tested cuts with equal power. I suspect the mirrors are dirty. Diminishing the laser’s power the farther away the head moves from the laser source.

There’s also a flaw in my design – the width of my holes are nearly twice the depth of my foamboard. The length is fine. And because the length is fine there’s enough tension to hold the piece once assembled. But somewhere I made an error in width – and propagated the mistake multiple times.

I created a design to do so – seven lines along the curve’s back surface, from which I clear foam. My math and measures appear correct. Unfortunately I punctured the front surface during a couple of my cuts. I had to tape over the curve to compensate.

I’ll give it another attempt tomorrow.

And, as it turns out, if you tape the acrylic template to the foamboard, the accumulative depth appropriately fits the slot widths. Providing tension. 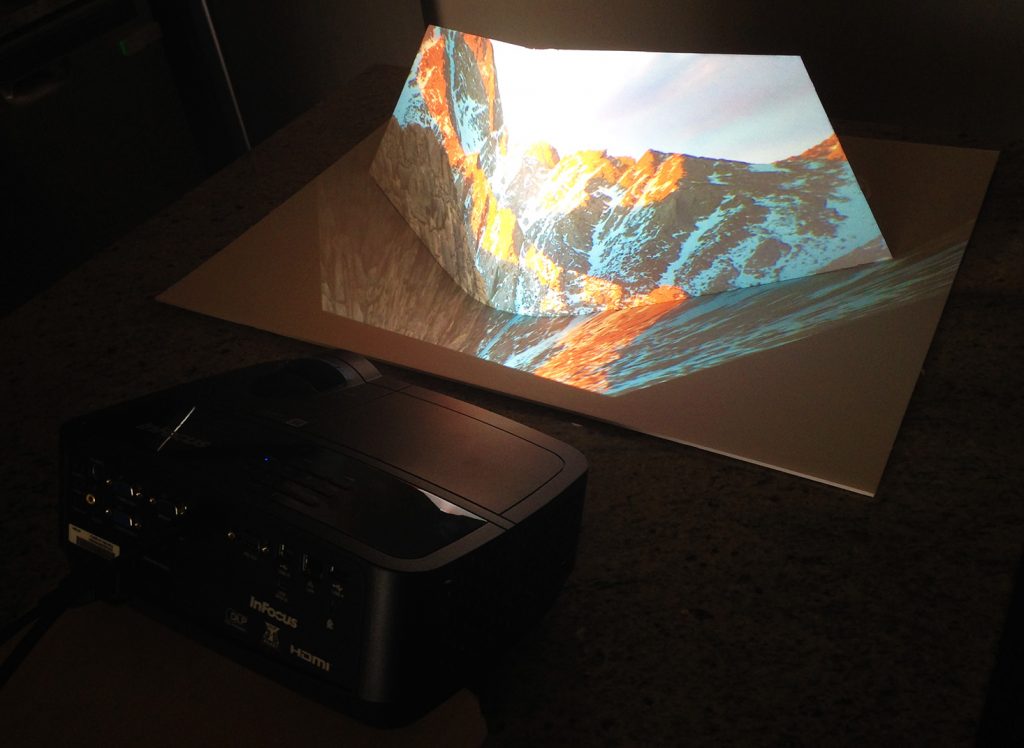 The foamcore model stands proud without supports. My desktop projected upon it.

Mistakes and failures are a natural part of any endeavor. They create the moments in which we learn. This project is no different.

This was certainly my first time building a foamcore model. From top to bottom, there were lots of firsts for me.

It was the first time ever using blender. Even though blender is better suited for 3D graphics and game work than it is for CAD – computer aided design – I thought it would be helpful to learn how to use blender for the future. And I always learn better with a real project and goal in sight. 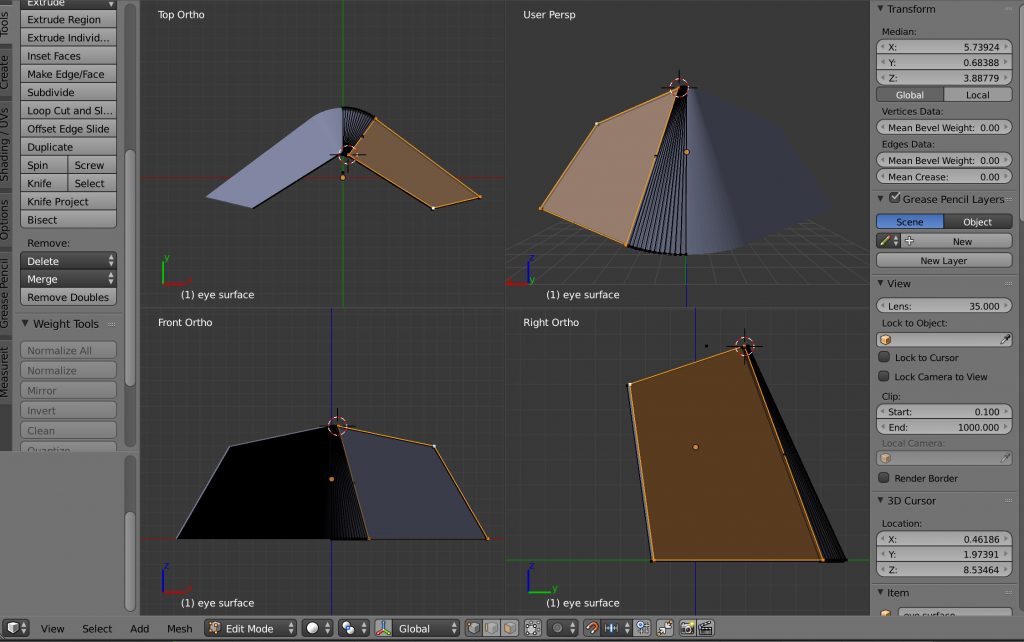 The 3D model designed in blender

I was very pleased with the design result. I was able to take the thing I pictured in my head and articulate it. To get it down on paper. Or ones and zeros in this case. That’s a feat I’ve often struggled with in the past. I’m glad to see a first success.

I used a tool to take measurements in blender of all my arcs, lines, and angles. I took those measures and used them for a 2D schematic capture. I used freecad. Which is not without its quirks. And at least one bug that made entering lines at angles a bit tricky.

There were a few problems with schematic capture as well. Rounding errors propagated into a drawing with several minor inaccuracies. But all in all the errors were on the order of 0.002 inches. Between the laser cutter and my x-acto blade, I’m sure I made errors well beyond 0.002 inches.

I used my freecad part designs and brought them into the laser cutter software, DXF style. I set my settings, and after a few false starts, my cuts came through.

I cut foamboard from my templates. Cut the grooves for my curve. And tested the assembly. Which worked pretty well, despite my mistakes.

When I was in Orlando for the IAAPA trade show last fall, I grabbed lunch with a friend from one of the scene shops. On the way out, we passed a series of models on an escalator display from Dynamic Attractions. I made a comment about how much I enjoyed models. My friend replied that he thought everyone who got into this industry enjoys models. That that joy is a part of why they got into the business in the first place.

Modelmaking isn’t just a part of the design process in the theme park world. It’s part of the fun in playing with spaces.

My small and simple foamcore structure plays into that sentiment. Creating this dimensional shape from flat pieces, born from digital renderings and designs, brings with it a certain satisfaction. A pleasure that forms within the place of space and thought. Born within the same sentiment of modelmaking – if only on a simpler scale.

Piece by piece and layer by layer, the model comes together. Each action adding or removing. Changing. Shaping.

And each model builds and supports each project. New projects bring new models. And new models bring new projects. There we find a cycle of consistency. And also an expression of uniqueness. Each model is different. And serves a different purpose.

And just as I finish my model – or will finish it tomorrow – so too do I finish the wash. Only to start again next week. Different but the same.