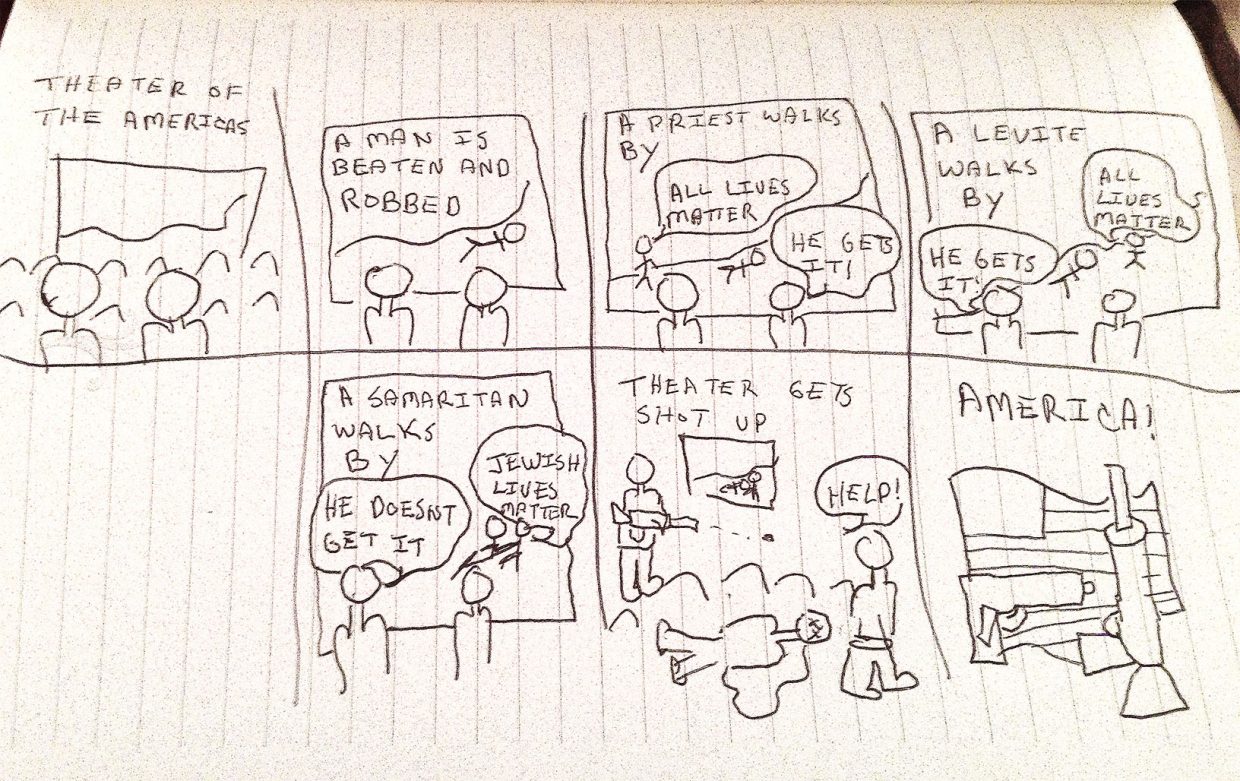 Living: in a covered wagon on a sheep farm in Belgrade Montana

This week in laundry I reflect on American culture. Or is it culture in America?

I woke up to a brisk Montana summer morning – at 40F. 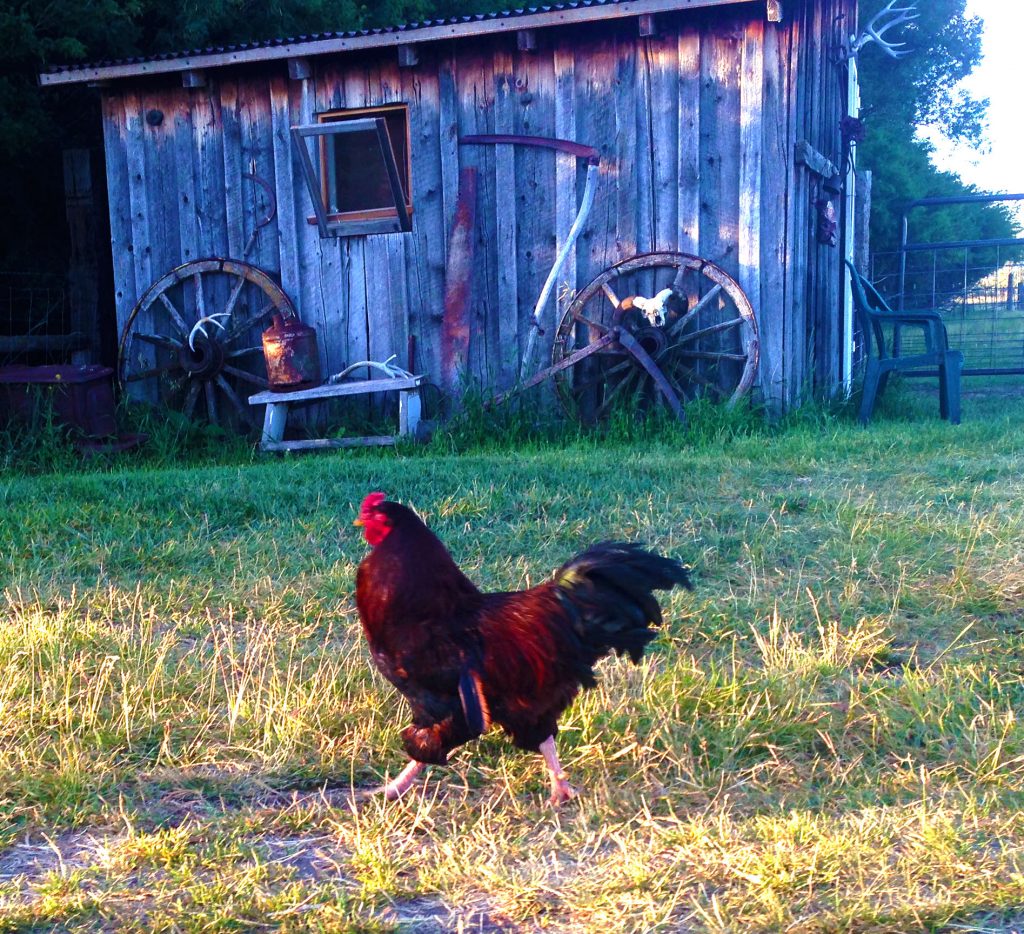 no alarm clock necessary. the roosters crow to stir me from my slumber.

Which means I slept in 40 degree weather as well. Because I’m living in a covered wagon. Which is less covered than a tent would be.

It also means I showered at a brisk 40 degrees. In the outdoor shower.

I’m also thankful I kept all of my winter clothes, including wool long underwear, in my car. Along with that sleeping bag I dug up. Because despite the cool air I’m actually quite warm and cozy in my bed.

When I was browsing Bozeman airbnb options, many ran the gauntlet of typical college town bedrooms. Really, nothing all that special.

And then smack in the middle of that list was a covered wagon. It spoke to me, in a way that said “this one is not like the others”. Because it isn’t.

The experience overlaps a bit with camping. Except there’s a shower. And I don’t need to dig my own hole when facilities are in need. So there’s that.

It also shares a little bit with the hostel experience – prepping my clothes and toiletries to trek out to the shower isn’t much different here than it is in a hostel. Except I’m wearing boots instead of flip flops.

I have the entire remainder of my travels to stay in standard faire apartment homes and coach houses. But now is the time for something different, in exchange for a little loss of convenience. 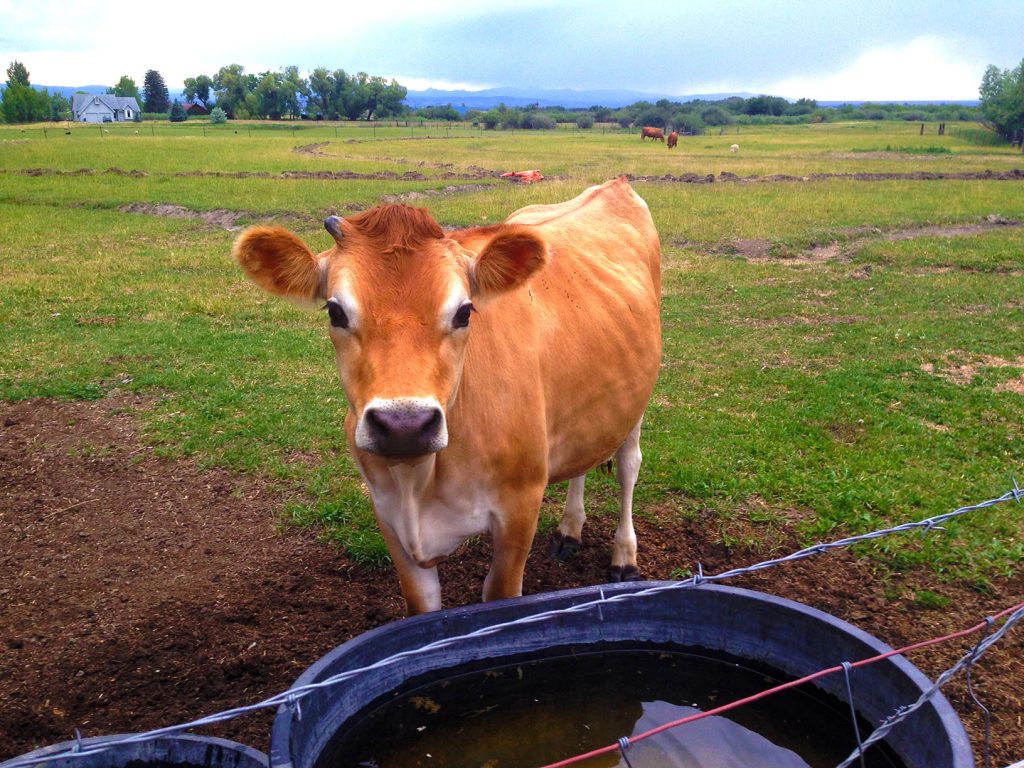 also there are cows

It’s hard to not feel refreshed sleeping through the night in that clean, crisp Montana mountain air. It’s a feeling I’d be hard pressed to find elsewhere.

In some ways, the remote experience is a brief taste at a bygone way of living – a  touchstone on the western migration culture. And in other ways it’s an aggressive attempt to quickly, but briefly, taste the flavor of living in a Montana community.

Bozeman feels much like the suburb of a major metropolitan area. Without the rest of the metro. But at least the food, coffee, and beer scene is quite good. I’ve found many Montana beers to rival Colorado – I spent my fourth with Dirt Wolf, down from the CDT for a day, at the Lewis & Clark brewery in Helena. 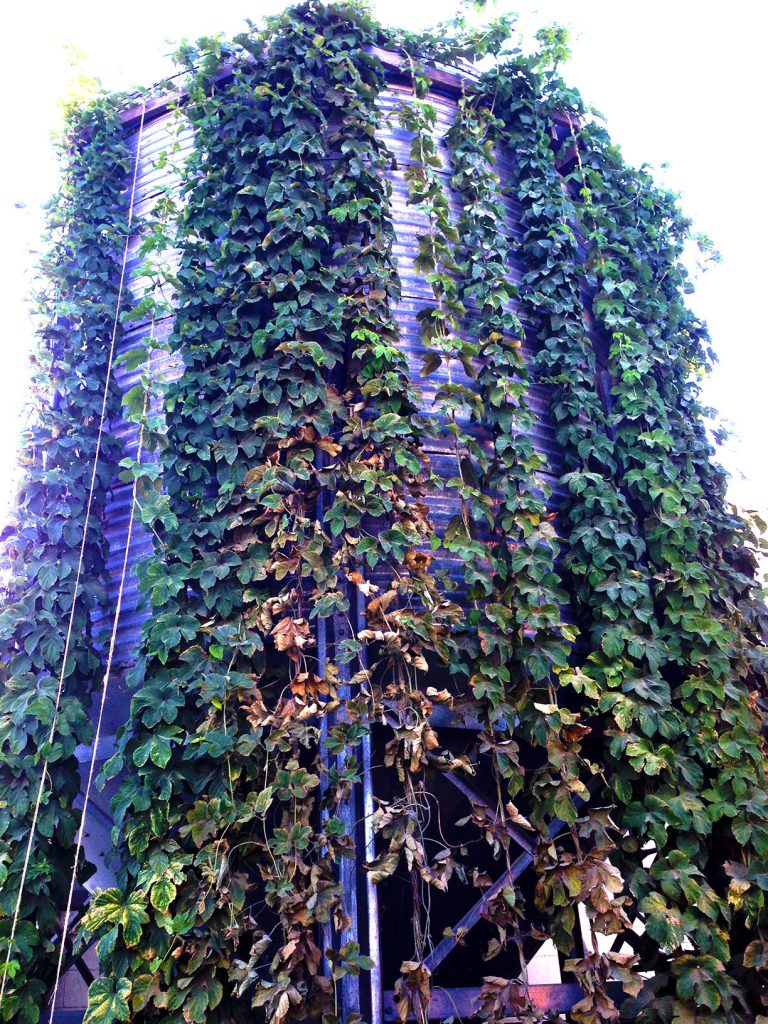 hops growing at the Lewis & Clark Brewery in Helena, MT

And the coffee I had this morning at Rockford was amazing. The only disappointment was the one cup limit on my favorite single origin bean – they told me they were “still roasting the next batch”. They were literally roasting the next batch. You could watch it happen in their small roaster. That’s the definition of fresh.

Much as I’ve enjoyed traveling the country to sample each local roast and brew, my travels also afford these moments to sample the local culture as well – select microcultures to the larger American culture. Regional subcultures against the whole.

The cultural variations are most definitely influenced by the locations – weather, employment, education, recreation, and other resources all influence the cultures of the people that root themselves in those places. I’ve written about the soft nature of the Seattle people in the Pleasure of New Places, or the subcultures of Boulder through people’s lifestyles in Lifestyles & Laundry.

I even wrote about the subcultures of conservatism and liberalism in my post on trenches. And American shame culture in Moving On and the Culture of Shame. 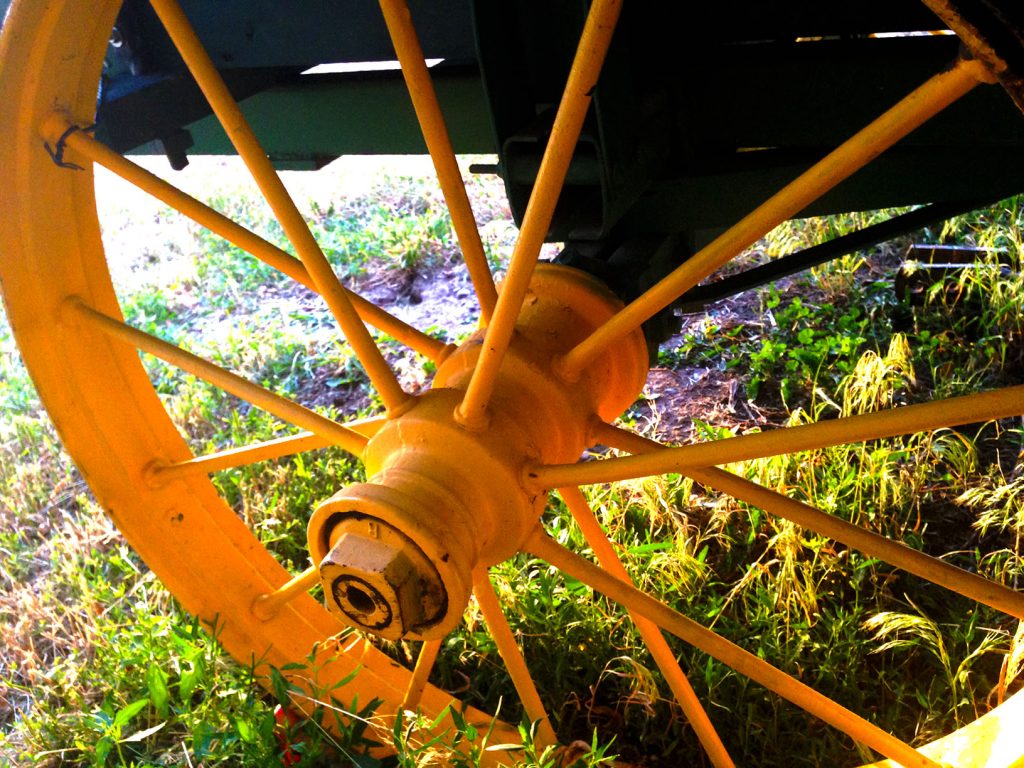 I’ve spoken on many things. Here’s some more spokes.

To me it really begs the question – what is the culture of America, and where do all these subcultures fit inside it?

Although I’ve had the opportunity to sample many cultural nuances throughout my travels, and there are many left to go – like the Cajun rich New Orleans – there’s one predominate American culture that I’ve avoided, and will likely continue to avoid.

And that is Black American culture.

I can’t even begin to answer that beggar’s question without first honestly exposing this fact.

It is an American culture because more than any other American culture, it was born, bred, raised, and incubated here in America. Though like many cultures, it borrows and borrows heavily. But isn’t simply an imported European culture, like the predominate White American culture. And it isn’t a culture with echoed overtones of prosperity at the hands of free will – since the culture was born in slavery and second class citizenship.

And it is a culture that’s so rich, it even birthed its own English dialect – a much stronger change of language from the divergence of American English from the British – and far stronger than the accent and small regional nuances of English across the US.

Talking about culture in America is strange and hard. In some ways, I feel like I’m not allowed to even talk about it.

That has a lot to do with being a straight, white, middle class, college educated male. I belong to the most privileged and predominant culture in America – the culture that traditionally expresses itself as the highest of cultures, under which all other American cultures are subservient.

I am a member of the culture that implicitly asserts that it isn’t a culture – but rather that it is the ‘right way of being’  – and that all cultures are other cultures. But not this one.

And because of that, it makes it damn hard to talk about culture.

Because of that, I feel that I am not even allowed to talk about American culture. Like a curious child who points and says “what’s that momma?” – and receive, in response, a shame-infused “Don’t point. Pointing’s rude”.

Talking about culture and ethnicity is easy when we point to the Polynesian cultures. This is where we send our anthropologists. And we see their results in museums. And textbooks. Classic culture.

But what’s it like to send an Anthropologist into white middle class America? That’s not going to be in a text book – because it bucks the cultural assertion that white American culture isn’t a culture at all. If it’s not a culture, it can’t be studied.

And so I grew up without talking about it. Or acknowledging it. A participant in perpetuating the cultural implication that white American culture isn’t a culture. Because to do so is a part of the culture.

It wasn’t until some years after secondary school that I witnessed an argument that completely changed the way I saw culture in America. And the way I understood race.

It was in a video about race and racism.  A handful of Americans from different races were gathered in a room. The producers sought to provoke a conversation about race.

Seeing that video was very much an “oh shit” moment in my life. I hadn’t ever thought of race and culture in American that way. I had never reflected upon my own culture that way. But to me, in that moment, it was immediately and vapidly true.

Because obviously I participate in all forms of macro and micro cultures. That’s a part of being a human engaged with other humans. But I had never thought of my own culture as a distinct culture before.

So yes, it makes sense to me that my culture is a culture of unculture. A culture that passively asserts it isn’t a culture, but rather ‘the right way of being’. Because I had never acknowledged it as a culture before, which is a defining characteristic of the culture of white America.

I grew up in the general understanding that racism is unacceptable. That all people are equal, and that the color of skin makes no bearing on that equality.

But no-one ever stopped to tell me that the culture in ethnicity also takes no bearing on equality. Ethnicity and culture never came into the equation. In some ways, it seemed like a taboo conversation. And in a culture that asserts it isn’t a culture, it would be.

I even feel embarrassed to write that down now. Because it feels like I’ve done something wrong. Because of that cultural bias that says “you can’t talk about this”.

Some try to use words to have a conversation. They coin phrases like “Black Lives Matter” to try and express themselves.

Some use actions to have a conversation. Protesters march nationwide.

It’s hard for me to feel like I’m justified in commenting on what’s happening, because I’m neither a law enforcement officer, nor a member of the Black race or Black American ethnicity – so I don’t know what it feels like to have a job that risks my life on a regular basis, nor to fear systematic persecution.

And argue all you want about if the latter is or isn’t the case, that’s definitely what the current state of affairs feels like from within the Black American ethnic group. The Black Lives Matter movement wouldn’t exist if it was otherwise. 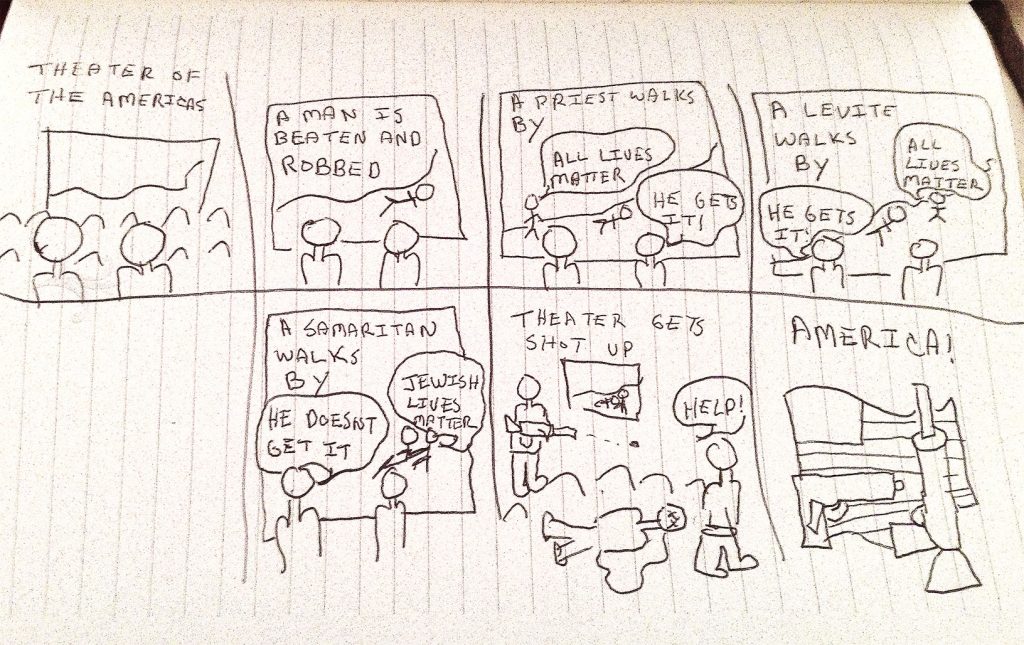 An attempt at therapy. By Comic. I try to capture the strange confluence of opinion and violence that flows through my news feed. PS – I always advocate compassion. Never violence. Also I wish I could draw.

But I think in all this talk about race and racism we’re missing an important point – that maybe we’re not really talking about race, but ethnicity. We’re talking about culture. But we’re calling it racism. And confusing the two isn’t helping.

It isn’t helping having a candid conversation, out of the trenches. And if you accuse someone of being racist, when you really mean they have culture bias, they may defiantly ignore your accusation, because they don’t consider themselves racist.

But they may be culturally biased. But we can’t talk about it now, because we misidentified culturalism for racism. Which only makes things worse of that person is a member of the culture of unculture.

That’s not to discredit that there’s still lots of evidence of straight up racism from people who belong to all sorts of cultural, professional, or any kind of group. From our friends to our politicians to our first responders to our military. Really and potentially from anything composed of persons. But I think that ethnic bias is more widespread, and more complicated. And at a minimum it should at least be a part of our conversation.

I think that all cultures to some degree bake in biases to the cultures we identify with. That’s the very nature of culture. I think it’s important to identify that, and understand that it’s natural, and to work through it in open conversation. Rather than labeling it racism.

And that’s especially important because while we might consider all equal by the color of their skin, we don’t consider all cultures equal. Just take a look at some extreme taboo cultures (as Americans we always like to grab at Nazi culture as a textbook taboo culture).

And that’s the problem. And it needs to change.

It means I have to invent my own culture, and then subscribe to it in order for that change to happen. At a minimum, I have to start acknowledging, vocally, that white American culture is a culture, but that it is not the ‘default’ culture, nor the ‘right’ culture, here in America. Or anywhere.

And that begins by having a dialog not about race, but about culture.

Despite whatever conversations may come, and whatever cultural differences exist between all cultures, present and yet to come, I take solace in the ubiquitous unifier.

No matter how we talk, how we feel, how we fear, how we feed, how we pray, or how we play, we all have one thing in common. And that’s laundry.