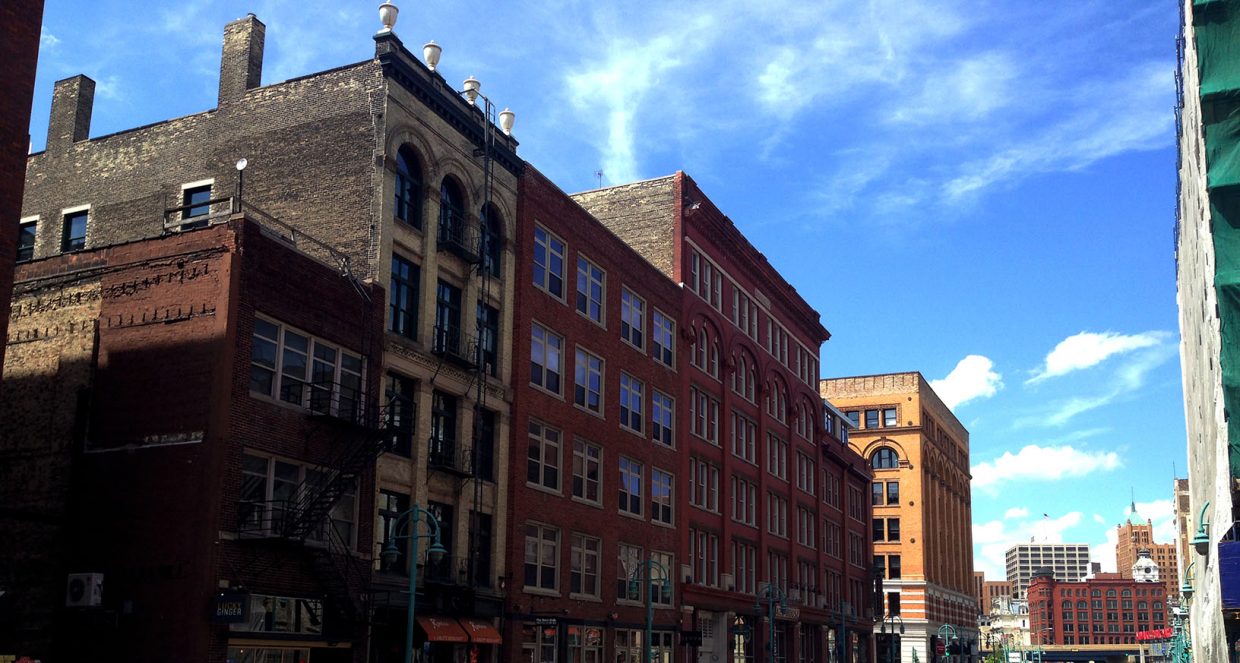 Moving On and the Culture of Shame

This week in laundry I prepare to move on.

This weekend marks the fourth consecutive wash in the same metropolitan area. My longest stretch since hitting the road.

While there’s been much to enjoy in this city built in cream colored brick, I am ready to move on.

I’ve felt a slow change come on – like a cloud of fog rolling in. Nothing significant, or even all that noticeable. But it’s enough to feel slightly left of center. To feel ungrounded.

I could spend ages, and unproductively so, trying to tease out the root. Is it the humidity? Is it my productivity? Is it unconscious echoes of the past, lingering within me? Or is it the complacent marsh of future-less-ness; an unqualifiable mosquito infested sludge of ‘meh’ that takes root in the soul.

Hard to say for sure.

It seems this city, against my will, continues to hold an energy born from the past. It lingers here in undefinable shadows.

The gray slowly creeps into Milwaukee

It’s a meaning that I allow this place to hold, even if I don’t want it to. I’m unsure how to shake this meaning, or unwilling to invest the energy it would take to do so.

It’s a meaning that’s reinforced not just through the buildings, bridges, rivers, and walkways that I touch in the present recalling the past, but more so through the people I engage within this city – my parents, siblings, and old high school friends.

These are the people I love – they bring great joy to my life, and I enjoy their company, their stories, their character of person, manner of speech, and each unique style of smile. Every minute with them is a gift I cherish. 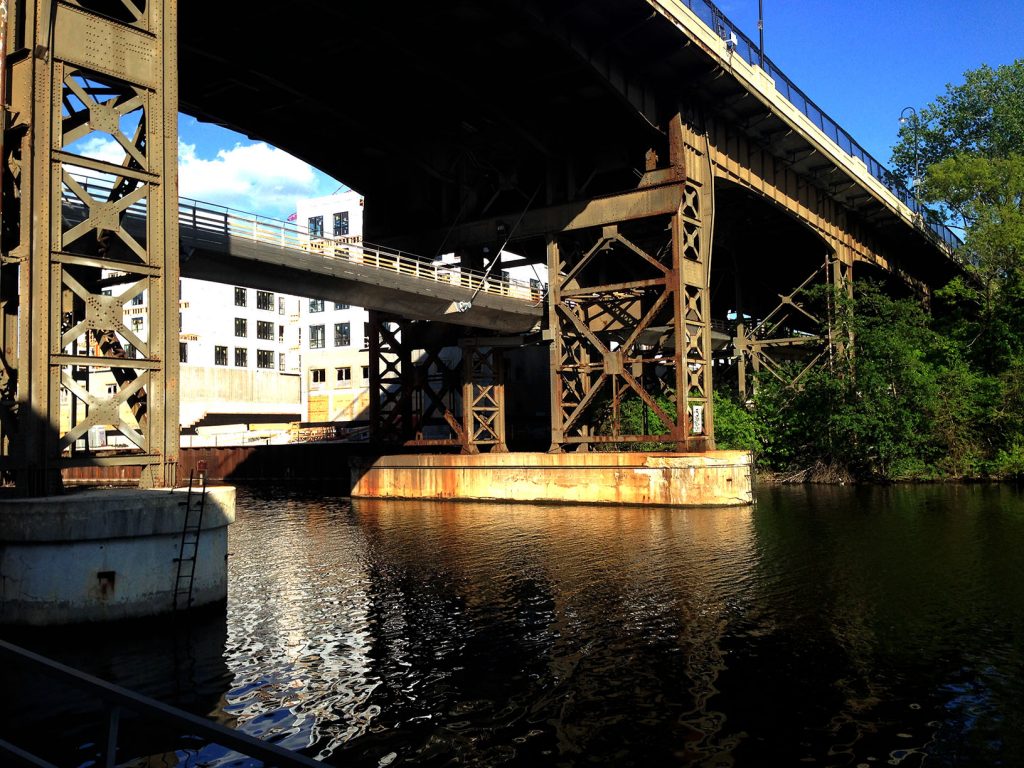 Milwaukee bridges the past and present

Yet somehow their presence pulls on dark strings in the heart. They tug on the latch of an old oak chest, musty, and locked away – hiding not quite the memories of the past, but rather a mode of being; a bygone way of living. Surrounding myself in their presence reminds me of a time when I built my life and my actions upon expectation. It reminds me of a time when I operated in response to the culture of shame.

And, although I’ve done well in the last year to move on from the culture of shame, I can’t ever forget that for the vast majority of my life, this is the way I operated. The only way I knew how to operate. Like a muscle memory, it’s always there – an easy, natural, default mode of thinking.

Usually, I might feel that I’ve moved beyond it. But in each echo of my former life that lingers here in Milwaukee, there is a channel for the fog of shame to silently, transparently, seep into my every breath – without me even realizing it.

I can sense it’s about from a telltale sign – the tendency to play victim. Shame has a way of incubating the feeling of self-victimization. And a culture steeped in shame considers this behavior acceptable.

Oddly, and counterproductively, when we feel wronged, when we feel the world has done something wrong to us, we find the need to put meaning into it. And when we tell ourselves “Something bad has happened to me”, we so quickly put meaning behind it in a form of self-victimization, especially in the presence of shaming. We easily turn “Something bad has happened to me” into “I must be such a bad person because of all that’s happening to me”.

This is the act of self-victimization.

It encourages a feeling of helplessness, because it shifts a hardship from a passing ethereal event to a central, persistent property of identity.

To feel victimized, and self-victimization, often coincides with shame. Whenever the sense is shifted away from actions, and instead focused on identity, there is shame at work. Shame strips hope away. Shame prevents us from getting better. Because when something is in our identity, we perceive that it can’t be changed. When something results from our actions, though, our actions we can control, so change – for the better – is possible.

It wasn’t until I encountered the work of Brené Brown that I understood our pervasive culture of shame, and how I had allowed myself to participate in it.

Brené’s book, Daring Greatly, put a vocabulary to something that I had started to see, but really did not yet understand.

It makes sense that shame would crop up so much in a book about vulnerability – because in order to be vulnerable, we must be available to the very painful emotion of shame, amongst other painful emotions.

From Brené’s research, we see shame is an unhealthy emotion – it’s detrimental, and not very useful. Guilt, on the other hand is constructive. While guilt is an unpleasant emotion, it helps shape our future actions in a healthy way through its influence. Guilt holds an opportunity for future change. Shame, on the other hand, holds no future. It simply asserts that you are – that there is no change, no chance for change, no opportunity to hope for change.

Yet shame evokes such a strong emotional response that in the heat of sculpting someone else’s behavior it’s an easy and effective tool. Shame is pervasively used in parenting across all of America as well as other cultures. That it exists as an acceptable behavior towards another human being speaks volumes to the central role it plays in our culture.

I, of course, have no personal experience in the matter of using shame in parenting – I’m not a parent myself. I’m relying on Brené’s research in this assertion.

As a young person, in the throes of a temper tantrum at the local supermarket, there’s only a limited handful of emotional influence that might dissuade our behavior to the contrary. And shame is one of them.

To the parent with other goals at hand – like completing the weekly shopping – now being bombarded with a vocally emotional child-in-tantrum, and the onslaught of unspoken criticism from the people around them, quick relief in the form of shaming may be the natural response.

Any time the tone of message is “you are naughty, you are wrong” rather than “this action that you took was wrong” is an act of shame, rather than guilt. The two are so similar, it’s easy to accidentally wield shame instead of guilt. And the emotional response is so much stronger with shame than it is with guilt, we may naturally be inclined to use shame before guilt, unless we’re really paying attention.

It’s also culturally acceptable to use shame to sculpt a child’s behavior. Or anyone’s behavior for that matter.

And so we grow up in a culture of shame. Without realizing it, we go about learning how to act in the world through a strange education steeped in shame.

As we grow older, we are so accustomed to the tool of shame that we naturally leverage it against others, without really realizing we’re doing it, or that it might be unproductive. And because we recognize implicitly that it elicits such a strong response in others, we quickly reach for it when we’re in need of doing so.

Shame persists and proliferates through social media commentary – in any communication that carries the tone “you are an idiot” rather than “this thing you said is nonsensical”.  It permeates the office environment – in every comment that seeks to imply “I’m smarter than you, better than you, deserve a raise more than you”. Anywhere that places a high value on a rank and status system, shame is likely lurking – it’s such a powerful tool in asserting, maintaining, and gaining status.

But, as Brené would point out, shame is unproductive. In the short term, it may help us achieve our goals when we wield it against one another. But in the long term, when we struggle to overcome our personal shame, rather than adapting our behavior out of guilt, we are at a loss. It takes more energy and time; it’s simply unproductive.

It’s better to live a life outside of shame; beyond shame. It’s better to shift focus onto actions – shame into guilt, and imperfections into mistakes. I believe this to not only be a secret of productivity, but also a key to personal happiness.

Mistakes can be overcome. Mistakes can be corrected. At least that is my hope; it lives at my core, and drives me to move forward, to learn, to grow, and to continue my adventure on the road. One load at a time.

Just as I move on from city to city – as I prepare to move on from Milwaukee – I hope to move on from my mistakes, and continue to move beyond a culture of shame. For the present moment, this is the meaning I make in my life. And it makes me happy to do so. 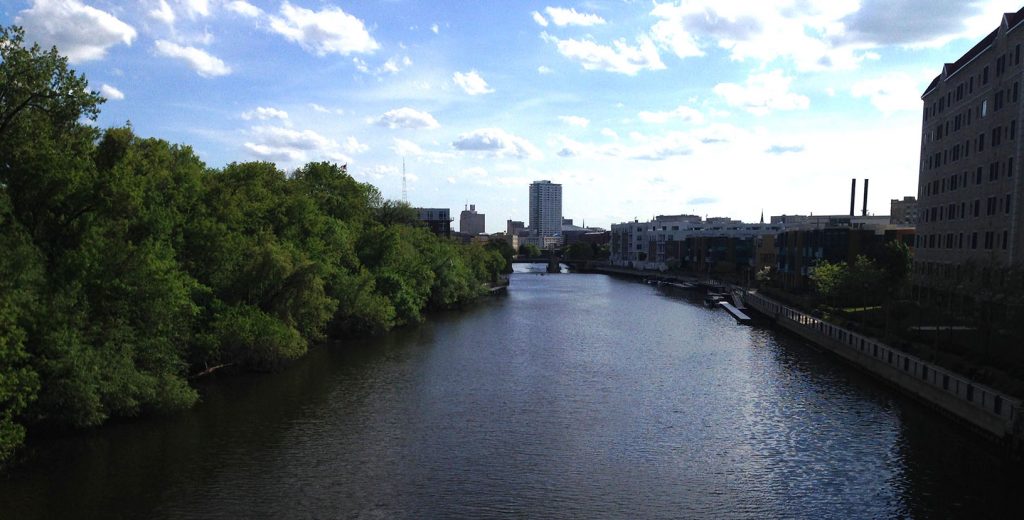 The Milwaukee river, ever in motion