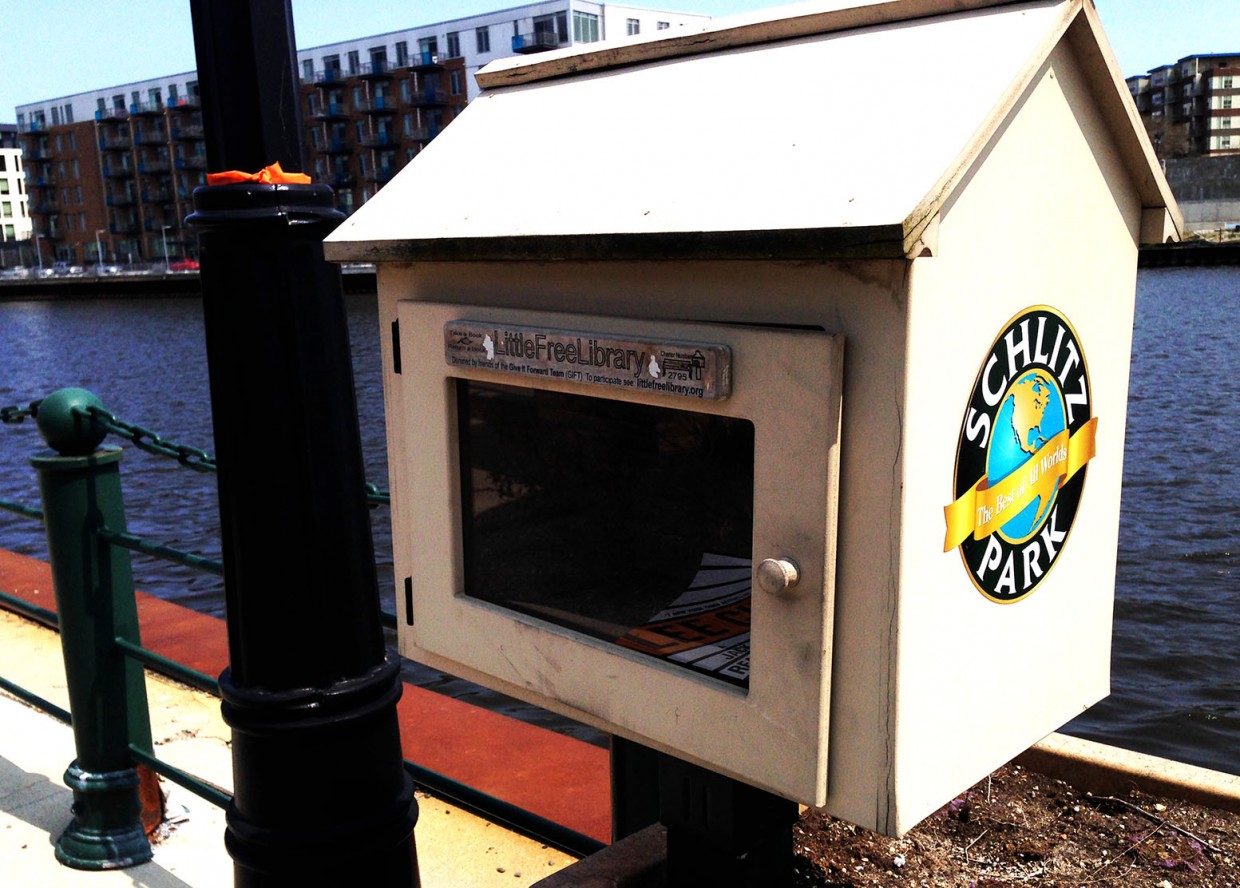 This week in laundry I soak in the Newstalgia.

I’ve written in the past on the way new spaces engage our attention.

Just as new places provide pleasure, old, familiar places, along with art, items, and experiences do so as well. And unlike the pleasure of new places, this pleasure has a name. It is called Nostalgia.

We’re all familiar with the feeling of nostalgia. It is a pleasant warmness that accompanies the revisiting of fond memories. This sensation most often occurs through experiences, and specifically in experience in places, that allow us to touch our past memories. It seems the recollection itself, through the experience, produces the pleasure directly.

The feeling is so strong and pleasant that professional persuaders – marketers, copywriters, and their ilk – often leverage the sentiment in the act of enticing your buying loyalty. You might see the terms “bygone era” or “golden age” used in an effort to evoke a nostalgic warmth. Or nostalgia may be applied by the decade, such as “50’s nostalgia”, “60s nostalgia”. I recently came across a “90s grunge nostalgia” playlist. 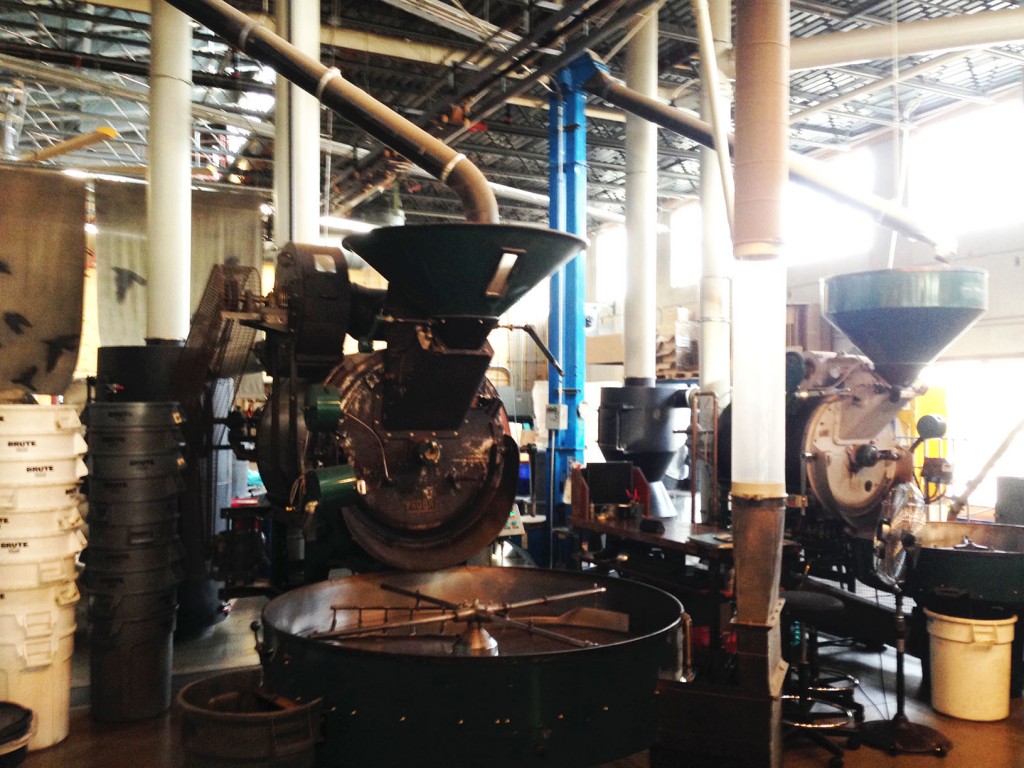 Industrial Chic – The Coffee Roasters at the Colectivo in Riverwest

But were those bygone eras really such golden ages? Or has our vision of the past shifted, most especially in service to a platform for serving up nostalgic sentiment?

As it turns out, the answer is likely no, and causationally so. Recent research has revealed that every time you access a memory, the original memory is not perfectly preserved. The recalled memory in the forefront of your consciousness must then be resaved as a new memory for future access. The original memory is distorted in order to access it. The altered memory is imbued with feelings and nuances relevant to the time of the recollection.

A series of stories told by a friend of mine best demonstrates the effect of this physiological revelation. In the original version of the story my friend made a comment at a bar about blue collar workers that Bruce Springsteen celebrates being unable to afford a ticket to a Bruce Springsteen concert. A blue collar worker happened to be in earshot, and issued a threatening verbal retort to the comment. The verbal altercation escalated between the two of them, bordering on but never reaching a physical altercation.

I witnessed my friend tell this story repeatedly over the next few months following the event. In the original version of the story, the fault of the verbal altercation was very gray. Because although the stranger was very confrontational, it was also clear to me that my friend, a white collar worker with Springsteen tickets in-hand, was making a condescending comment along class lines regarding blue collar workers. Condescension is an easy agitator – throw alcohol and machismo on the fire and the verbal altercation seems the obvious outcome.

But each time my friend retold this story, it changed. Mostly through omission, but also through minor incremental detail changes. Each time the story was retold, the fault of the event shifted more and more to the stranger, and away from my friend. By the last time I heard the story told, it had morphed into a story about an unprovoked verbal assault upon hipsterism launched by a stranger upon my friend. The nuances of the original condescension had been completely lost.

At the time I found the story evolution very frustrating and unfair. Now I simply recognize it as a natural outcome of human physiology.

I also suspect, though I can’t confirm, that the effect of altered memory recall is more pronounced in extroverts than it is in introverts. We all alter our memories as we recall them, but I imagine that the altered memory moves much further away from the original during each recall for the extroverted.

Certain thought vocalization neural pathway theories of extroverted vs introverted individuals might support this notion. The theory supposes that thoughts take a longer neural path within introverts prior to physical vocalization than within extroverts, and this elongated neural processing may help keep accessed memories associated with the articulation better preserved as a part of memory restoration.

In any case it’s easy to see that, through memory recall alteration, the past can change for the better – at least our understanding and memory of the past – both personally and through the collective social consciousness.

So ages may be lackluster in their origin, but are gilded through our collective recall of the past, and through our stories retelling the past, as they morph within our minds and between each other. Through our interpersonal storytelling on micro (person to person) and macro (broadcast and distributed media) levels golden ages are born, and the past rises like a phoenix from a pigeon more than ashes. Our migrating memories become the scaffolds upon which we graft our nostalgia.

Today is a day thick in nostalgia. Milwaukee is my scaffold. Or rather, my memory of it.

I grew up in the suburbs outside of Milwaukee. My youth from ten to twenty is peppered with excursions into the city to visit the museums, the lakefront, Summerfest (billed as the world’s largest music festival at 11 days, 11 stages), high school formals, and cultured grocery stores and coffee shops.

And here I am, in Milwaukee once again. It’s somehow different, and somehow just the same. I come across breweries, brands, and architecture that solicit fond memories of past pleasantries. A field trip to the Milwaukee Public Museum, or a winter excursion to the Marcus Center for the Performing Arts.

Late in high school, a group of friends and I would come into the city to visit a coffee shop called Fuel Café. A week ago I wouldn’t have been able to tell you where it was, only that I remember it having a nefarious otherworldness about it, that it wasn’t in the best part of town, and some driving routes brought you through some shady neighborhoods.

I can tell you where it is now though, because my airbnb is just a block away. 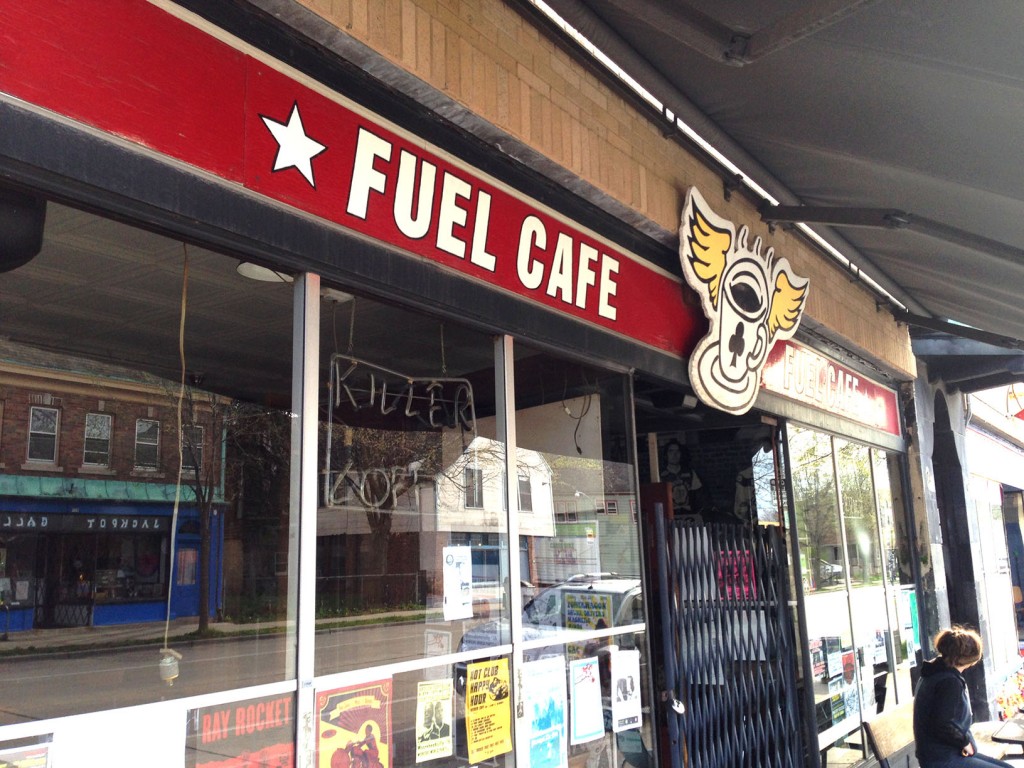 But while this is the same Fuel Café I remember so fondly from my youth, and being back here certainly evokes the nostalgic sentiment, I find that it feels like I’m seeing the café for the first time from a fresh new angle. Because my experience of it is filtered through the lenses of my great adventure, and the space is no longer in the magic realm of the other space, but the immediate realm of my living space.

Unavoidably, it is coated in the pleasure of new places. And undeniably, it holds the pleasure of nostalgia. Like two rushing rivers converging. Or saltwater meeting freshwater on the Mississippi Delta. Each unique, each strong, each vital, and all violently in communion. Here in Milwaukee, where the rivers of my life converge, the pleasure of new spaces and nostalgia emulsify in a mayonnaise I can only think to call newstalgia. It is a delicacy unto itself.

All over the city I’m constantly greeted by newstalgia. The proliferation of Pabst and Schlitz brands tug on nostalgic strings, though their incarnations may be new – such as a take a book, leave a book box in Schlitz park on the Riverwalk. It’s a cute, fresh new encounter, soaked in Milwaukee Schlitz nostalgia. 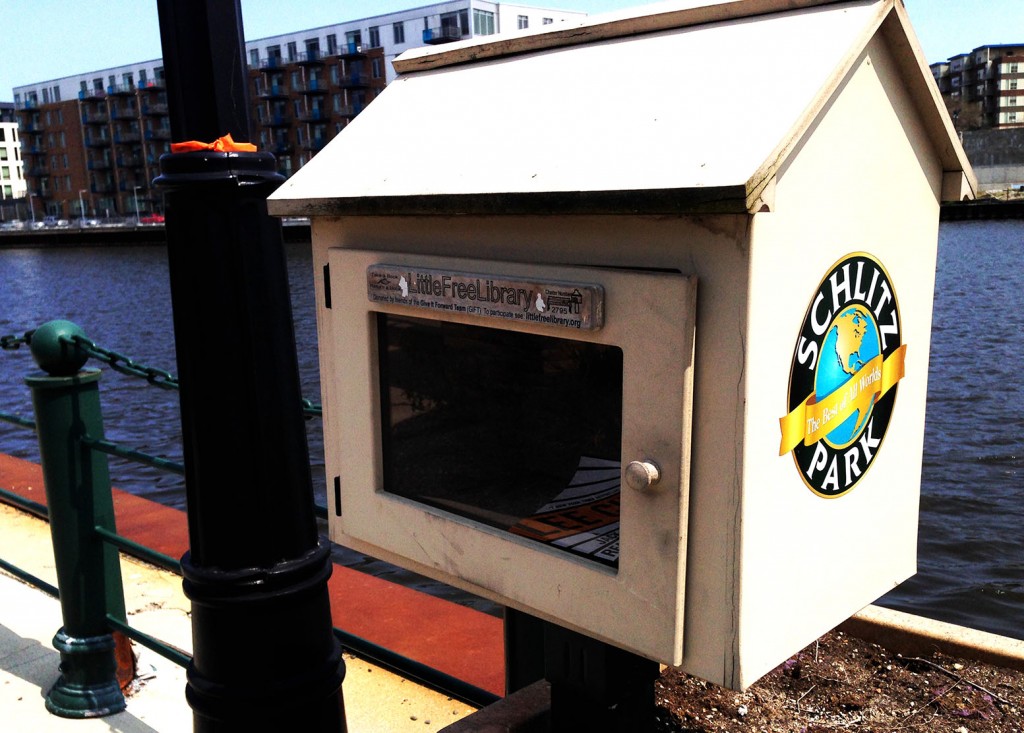 The Little Library In Schlitz Park – Newstalgia at it’s best

Or the Streets of Old Milwaukee at the Milwaukee Public Museum. As a child, this exhibit, a recreated outdoor intersection in 1920’s Milwaukee built inside the museum, was an institution. But I now understand it through the arts of theme park attractions – the exhibit shares the core lighting, set building, and even simple show control elements employed in theme park development. 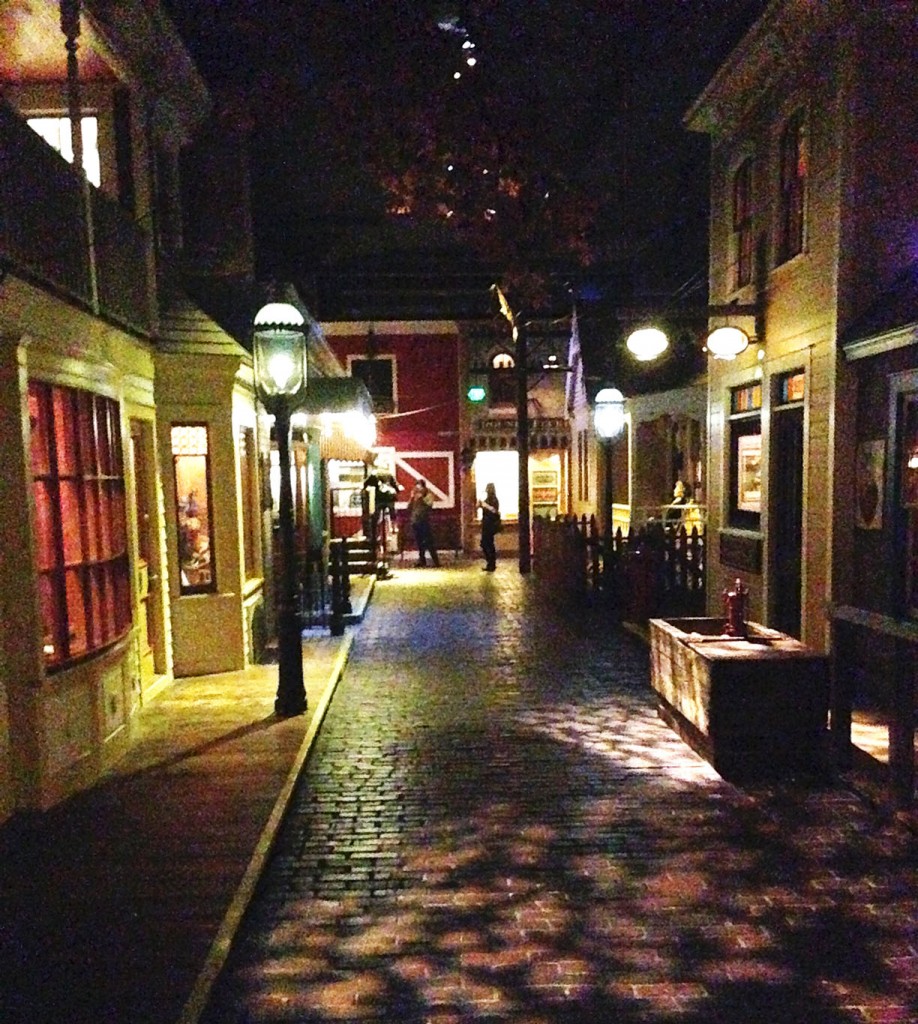 My original experiences of the exhibit were an experiment of artificial nostalgia – a romanticization of an old Milwaukee that I had never experienced, and neither had my family (being Southwest and Southern American immigrants to the northern Midwest when I was nine).

Revisiting the exhibit now solicits a doubly-nostalgic experience, since it warmly evokes the pleasant experiences of childhood, along with the faux nostalgic romanticism of the old streets of Milwaukee.

On the opposite token, it is a completely new experience. This is my first visit since the exhibit was ‘reimagined’. They’ve built a number of new sets (new faux buildings) and even added a strong show element through an old Milwaukee street car, the windows of which display an animation riding down the street in both present day, and turn of the century Milwaukee.

These two feelings combined converge to create a truly and undeniably newstalgic experience. And just like all memories are modified in a reflection of the moment they are remembered, my current experience and knowledge now color my past experiences, casting a new shadow on this iconic space.

This location is now shaded with my knowledge that the show playback mechanism employed in the Streets of Old Milwaukee trolley is a Gilderfluke system, the same company that produced equipment used in the legacy, and still reliably running, systems in the Haunted Mansion at Disneyland (though officially, no one can confirm this). 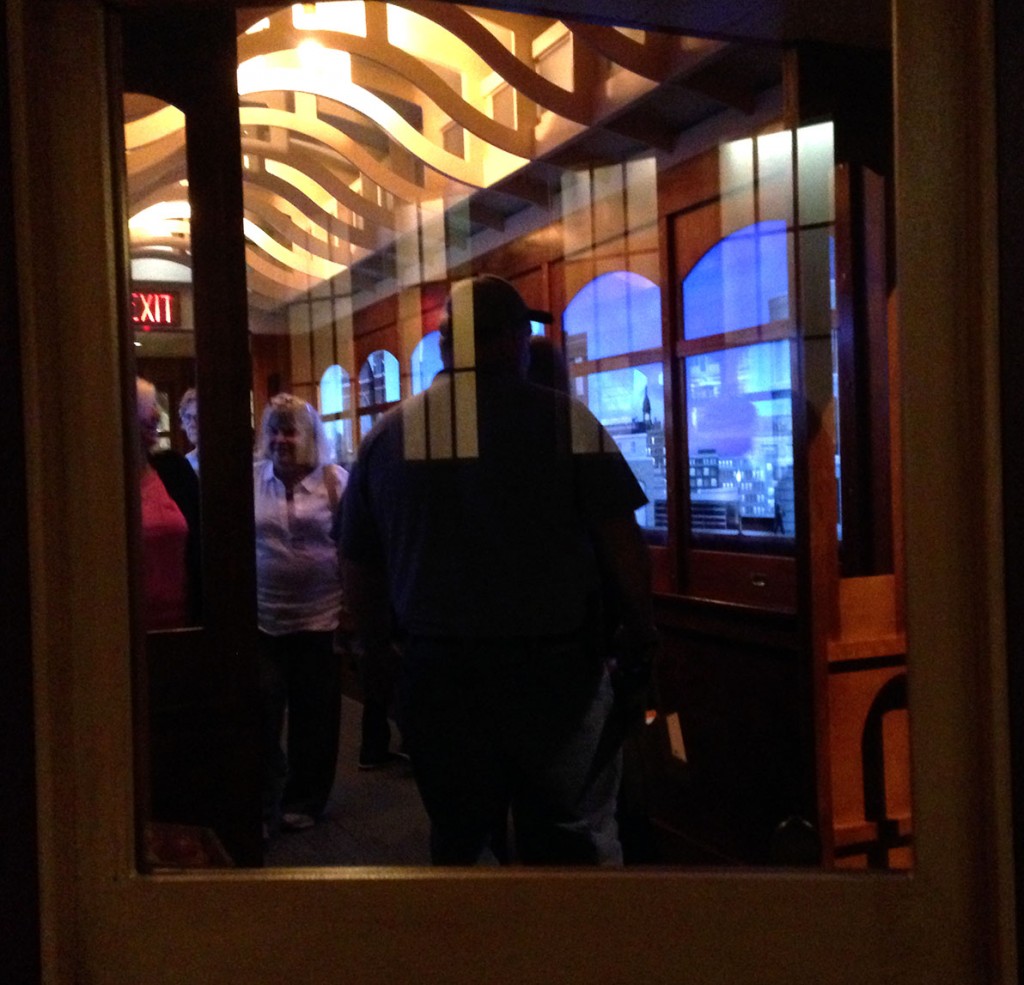 It’s strange the way these memories converge and collide. This space, the Streets of Old Milwaukee, that was once so unique to my childhood, now evokes ghosts from the Haunted Mansion, a conversation on a trade show floor with the Gilderfluke company, a trade email sent showing their equipment in a recreated street car, and myself, walking through that car, bathed in multimedia, into the streets of old Milwaukee, and through my memories past in present.

Although Milwaukee is a newstalgic minefield, there are parts of this experience that are entirely without nostalgia, and simply new unto their own. Like here, in the Washing Well. Here I find the familiarity of the laundromat, with new faces, in a new space. For all the pleasantness that nostalgia has to offer, it’s the pleasure of the new, and the new alone without the nostalgia, that I care for the most. If nostalgia gives us a reason to pine for the past, then the pleasure of new places gives us a reason to pine for the future.

In the latter, we can find hope. We can find a better tomorrow. Not just because we re-remembered it to be better, but because it really is so.