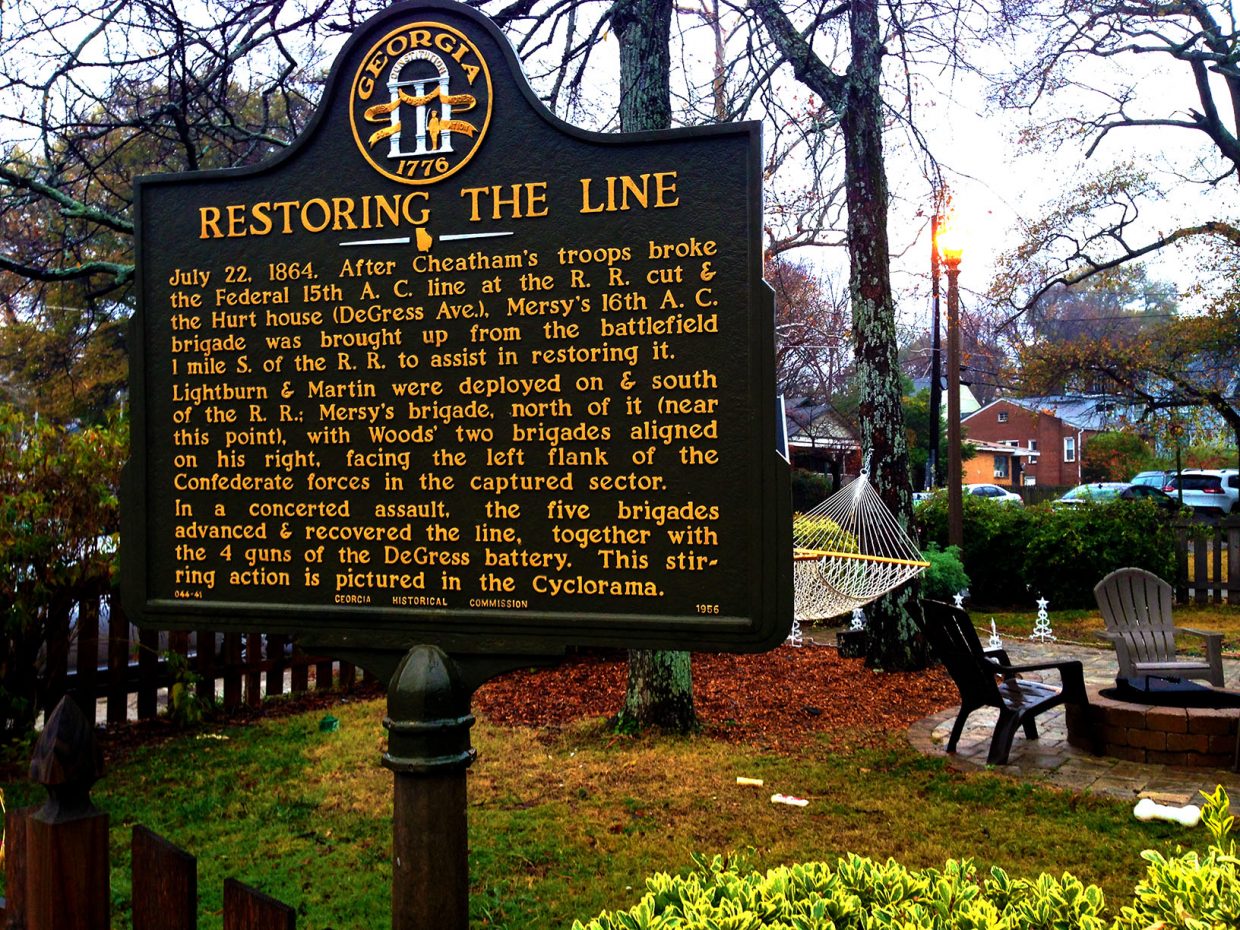 The Signs of Melodrama

This Week in Laundry I find there’s signs of melodrama in Atlanta.

I’ve been through many cities on this journey. And many of them hold memorials to Martin Luther King, Jr. Some are in the form of memorial streets and drives. Some are statues and national monuments. These are the memorials you find in just about any city in the US.

But only one can hold the memorial dedicated to the place of death. That lives in Memphis. I have never been.

And only one can hold the memorial dedicated to the place of birth. That lives just down the street from this laundromat. I do enjoy a wash with a bit of history to it.

The King Historic District in Atlanta

As for my week in Atlanta on the whole, there’s been less of history all together. Less of anything really. Because I haven’t left my neighborhood of Little Five Points and it’s neighbor, Inman Park, all week. Except for this very moment to do laundry.

That’s largely because it’s been cold and rainy. For most of the week, I might as well have been in Seattle. And when the sun finally did come with blue skies, like today, it’s been close to or below freezing.

The weather so encouraged incubation, I didn’t even bother commuting to a coworking space. With an ample living room and excellent internet, I kept to my airbnb. I kept productive.

If anything, Atlanta’s been a slice of life I lived a long time ago, in Chicago. Comfortable. Confined. Situated to my immediate needs. Plenty of places for drinks. Highbrow to dive bar. Plenty of places to eat, from gastropub to greasy spoon. And the plenty of coffee shops, though none so particularly snobby to my usual taste. And a small, comfortable place to live and work. If only for the week. 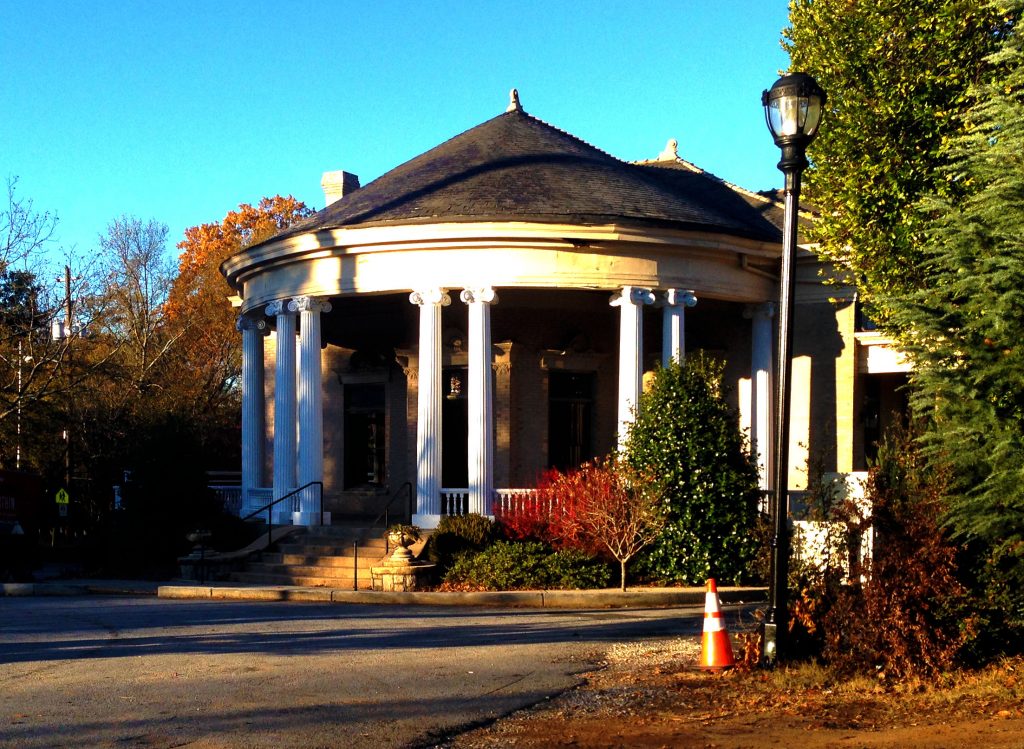 The Wrecking Bar – in a restored Mansion in Little Five Points

Beyond that, I haven’t gotten to know much else of Atlanta. And I probably won’t. I’ll fly out at noon tomorrow. The closest I got to any true tourist destination might be the President Carter Library and Museum. And I didn’t go inside. 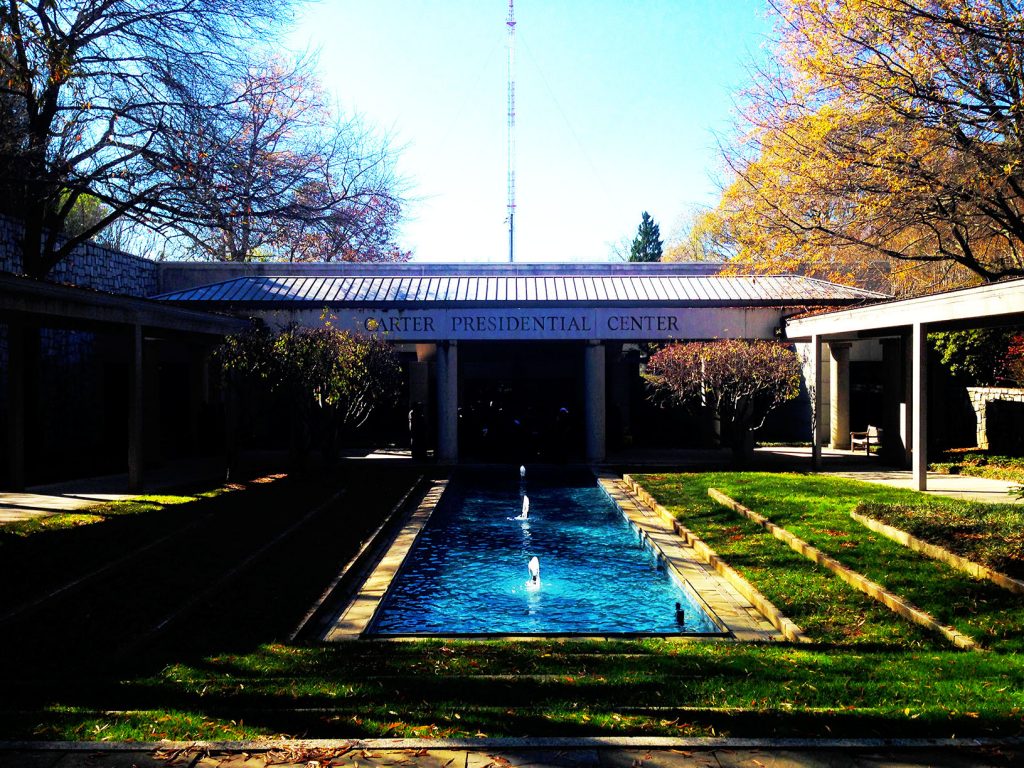 The Carter Presidential Center – in all its Georgian glory

Which is fine. Honestly, even on a year long adventure, some weeks are more lack luster than others. After so many in Orlando, and in the Northeast Megalopolis, there’s bound to be an experience on the other side of all that excitement. Especially in this weather.

And maybe my unengaging week in Atlanta is just a symptom. Not just of the weather, but where I am in this adventure. I could easily endeavor to travel for forever. But I know that this adventure will end with the year in December. Perhaps, because of that, I’m a bit more relaxed. A bit more resigned.

That said, little five points, or l5p as the neighborhood styles itself, is far from unengaging. This gem of alt culture echoes of Portland, Seattle, Pittsburgh, and Austin. From the thrift stores to the quirky shops. From the artwork to the venues. Even the sidewalks find ways to stay cool.

The shops of Little Five Points 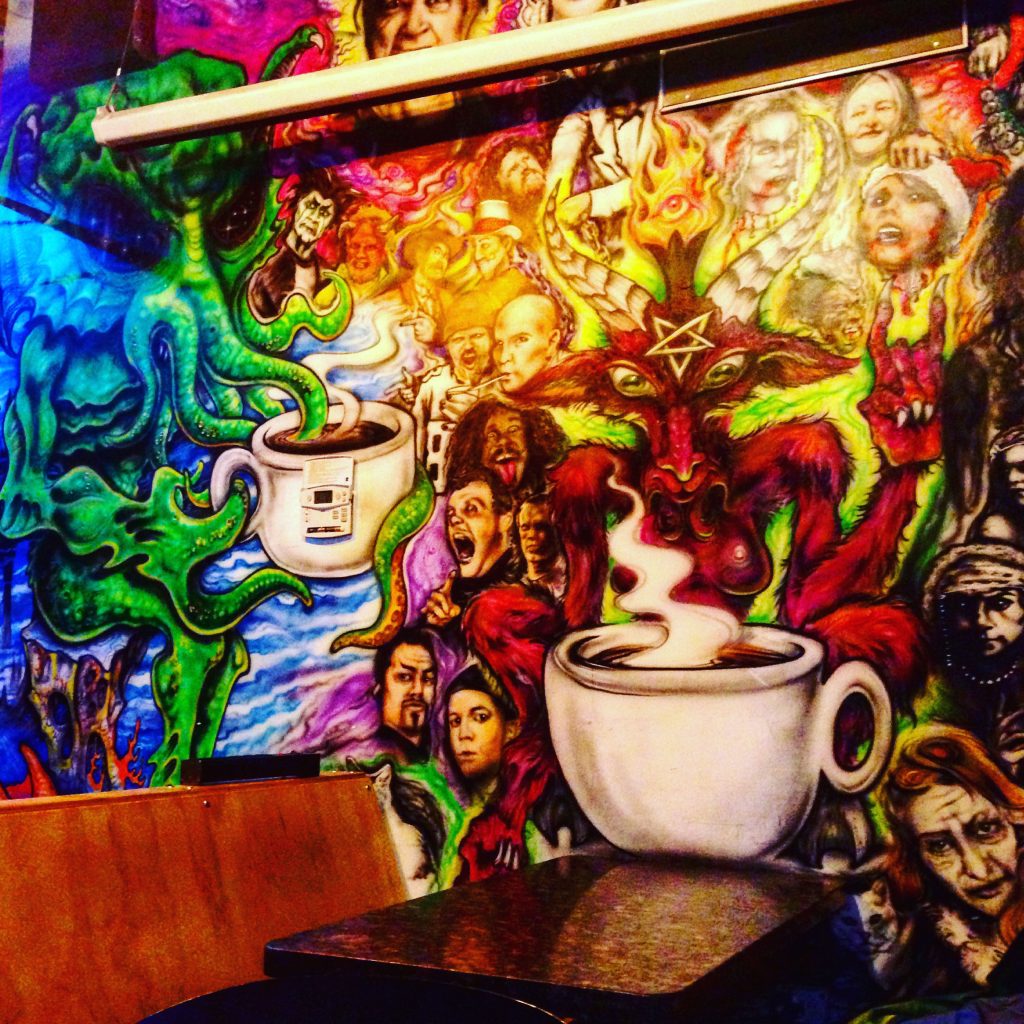 The neighborhood, along with its older brother Inman Park, feel like groves of homes growing deep in the forest. With scattered parks and fields thrown onto the rolling hills. None too dissimilar from Asheville. Though there are no mountains in the distance. And there’s no Biltmore to be found.

But the city shares with that other Georgia gem, Savannah, in a thick deciduous tone. Though Atlanta lacks the colonial history, despite Georgia’s colonial past. That’s because Atlanta formed as a metropolitan institution at the onset of the United States rail road boom. Like many other cities its value lies in transportation. Not on the water, like many great river and port cities. But as a key intersection in two major US rail lines.

Soon after inception and growth from the rail, the Georgia Capital was relocated. Then came investments in education. And then came the metropolitan growth.

And even though Atlanta lacks Savannah’s colonial history, it does hold a rich history all its own. Through the Civil War. In fact, l5p and Inman Park are nearly littered with historical markers for key events in the Civil War. From battles to hills to generals to defeats to victories. Signs pop up in intersections. In parks. Even in yards.

I imagine we find such signs due in part to the proximity to the rail line in Inman Park and l5p. Many of the marks hint at this – their importance is tied to the capture or destruction of the rail supply lines.

But with signs popping up on just about every street corner – like pegs dropped on a google map – it’s hard to regard them with the reverence they deserve. Instead they look like eyesores. Sadly standing in a loose herd. Silently asking to be quietly ignored.

A local grove of historic markers

It goes to show just how delicate sits the balance between overdone and tastefully addressed. It’s the dangerous border between drama and melodrama. It’s a problem not just found in the scattering of historic markers, but in screenplays and school drama. In independent and feature film dynasties. In large scale theme parks, and in intimate haunted attractions.

Where does one draw the line? And when does one cross it? As a designer, how do you prevent genuine emotional appeal from falling into the despair of parody and melodrama unintentionally? As a guest or viewer, when you experience melodrama meant to be genuine, why do you experience such an event as if it were soap in the mouth? And can one person experience a genuine emotional appeal while the other experiences the melodrama? Or is the realm of the uncomfortable and overdone universal?

And what makes melodrama melodrama? What turns an experience or work of art from genuine to distasteful?

Exposition is certainly a part of the equation. Right out of school I produced a feature film. My realm was logistics. Union contracts. Payrolls. Scheduling. Call sheets. Coordination. Locations. And no control over creative content. The writer-director owned all creative decisions. He had secured the funding. It was his film. And I agreed to help – because this was the only person in Madison WI that I knew was ambitious enough to pull off a feature film. Someone to match my ambition and belief in hard work and the ability of achievement.

But before principal photography even began, long after I had committed to the project, I knew it would be problematic. I could see it in the script. There was far, far too much exposition. It wasn’t just unnecessary. It hurt the film.

The final film cut out huge swaths of dialog. Lots of components I had found problematic long before shooting. And yet, the melodramatic, expositional tone carried in this original script remained present in the footage shining on the screen. Performances were often just too much. The concept, to a certain degree, too much.

To me, it was a creative disappointment. To the director, I think it was a phenomenal learning experience. The film was logistically a huge success. The things that I held responsibility over were executed well, especially considering our absurdly low budget. We had union actors. We followed the union rules. We shot at amazing and interesting locations. Nobody got severely hurt.

And the final product was nothing short of melodrama. A great student work. The output of an educational experience. 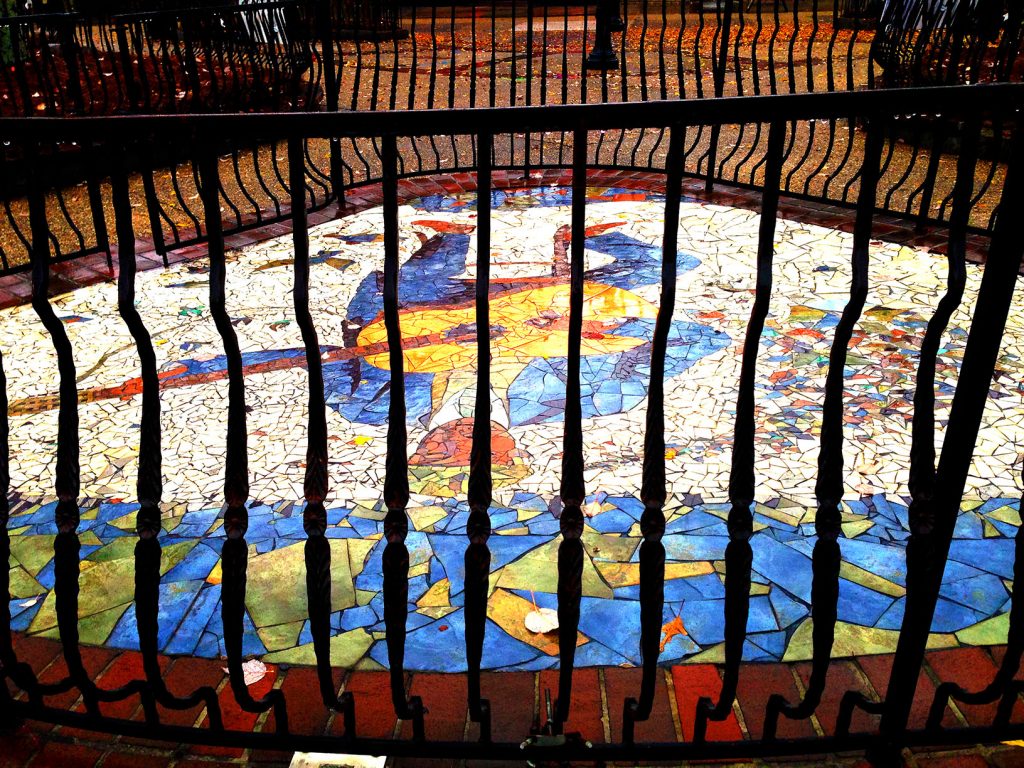 Is this sidewalk overdoing it? Or within taste? A pedestrian mural at the center of little five points.

It was working on this project, early on, after I saw this massive script of exposition, and a director unwilling to fix it, that I decided to abandon film for a career as an engineer. Something I was also good at. And something where I wouldn’t have to pay dues for ten years before getting a leg in.

I like to think of it as the right decision made for all the wrong reasons.

All because of exposition. Of melodrama.

The thing about exposition is that people don’t really know themselves that well. And what they do know, they don’t really talk about. Or they intentionally misrepresent, or recast, to advance social status. That’s just the nature of being human.

So quite naturally, scripts and experiences that violate this principle feel bitter and unnatural.

Perhaps the best guiding principle is that when in doubt, less is more. And to always be doubtful.

And while when it comes to art, that might be hard, when it comes to laundry, it’s relatively easy. For we mostly only ever do just enough as necessary. Minimalism is a beauty when it comes to this chore. Or is it that chores enforce minimalism in their pure necessity? You perform. You complete. And then you move on to more important things.

As for this week, I do just that. I am finished. A wash, a dry, a pack. The bare minimum of necessity.